WASHINGTON - The number of Americans applying for unemployment benefits fell to a pandemic low last week as the job market continues to recover from last year's coronavirus recession.

Jobless claims dropped by 10,000 to 281,000, lowest since mid-March 2020, the Labor Department said Thursday. Since topping 900,000 in early January, weekly applications have steadily dropped, moving ever closer to pre-pandemic levels just above 200,000.

In all, 2.2 million people were collecting unemployment checks the week of Oct. 16, down from 7.7 million a year earlier.

The pandemic slammed the economy in the spring of 2020. In March and April last year, employers slashed more than 22 million jobs as businesses closed or reduced hours in response to lockdowns and consumers staying home as a health precaution.

The economy recovered with unexpected speed, helped by the rollout of vaccines and generous government relief checks and other spending. By last month, the economy had reclaimed more than 17 million of the lost jobs. But that was still 5 million short of where the labor market stood in February 2020. 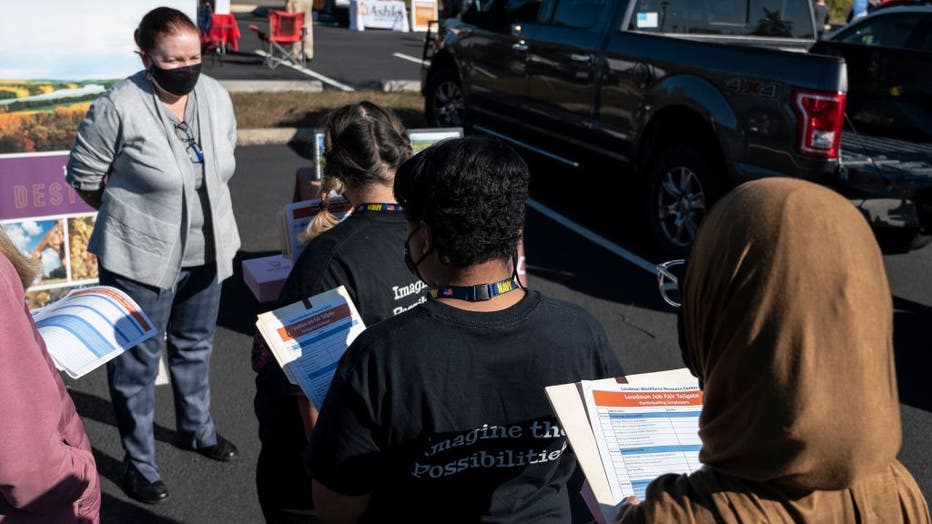 FILE - Recruiters speak with potential applicants during a tailgate job fair in Leesburg, Virginia on Oct. 21, 2021. (Photo by ANDREW CABALLERO-REYNOLDS/AFP via Getty Images)

And hiring slowed sharply last month — to just 194,000 new jobs after averaging a 607,000 a month the first eight months of the year. That is partly because companies can't find enough people to fill their job openings — 10.4 million in August, second-highest in records going back to 2000.

Jobless claims "continue to trend lower, gradually moving closer to levels prevailing prior to the recession," Rubeela Farooqi, chief U.S. economist at High Frequency Economics, wrote in a research report. "Businesses are holding on to workers amid reports of severe labor shortages.″

Many Americans have retired. Others are still wary of the health outlook or struggling with daycare issues. Still others are rethinking their lives and careers after spending months locked down at home.

RELATED: Can you collect unemployment if you are fired for not getting the COVID-19 vaccine?