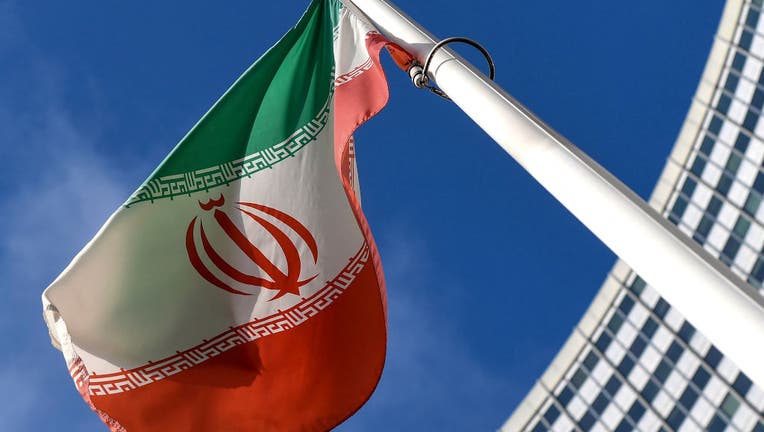 The Iranian national flag is seen outside the International Atomic Energy Agency (IAEA) headquarters during the agency's Board of Governors meeting in Vienna on March 1, 2021. (Photo by JOE KLAMAR/AFP via Getty Images)

WASHINGTON - The United States and Iran will talk with other world powers about returning to the Obama-era agreement that limited Iran’s nuclear program in exchange for the removal of crippling economic sanctions.

The talks are expected to take place Tuesday in Austria, the Associated Press reported. Ned Price, a spokesman for the State Department, called the resumption of negotiations a healthy step forward, but he doesn’t expect an immediate breakthrough.

The 2015 nuclear deal, known as the Joint Comprehensive Plan of Action, was a key measure for the Obama administration, but Republicans opposed it up until the moment former President Donald Trump backed out of it in 2018.

Relations between the two nations had not been great, even while both sides were committed to the deal. But they quickly soured once Trump pulled the U.S. out and hit the country with more sanctions.

Iran ended its compliance with the deal when it began stockpiling enriched uranium again. And Iranian ships began harassing sea vessels of America’s allies in the Persian Gulf and even taunted the U.S. Navy on occasion.

RELATED: Trump instructs Navy to destroy 'any and all Iranian gunboats' harassing American warships at sea

Tensions peaked in Jan. 2020 when Trump ordered the killing of Qasem Soleimani, a key figure in Iran’s Islamic Revolutionary Guard. Iran retaliated with airstrikes on a military base housing American troops in Iraq.

Both sides backed down before the conflict escalated to actual warfare.

President Joe Biden has said rejoining the JCPOA is a priority for his administration but did not commit to any particular timeline.

The initial goal of the deal was to deny Iran the material required to make a nuclear bomb. Iran has insisted it has no interest in a nuclear weapon.

Since both sides backed out of the deal, Iran has enriched enough uranium to make a bomb, but not as much as it had before joining the JCPOA.

As news of pending negotiations broke Friday, both sides laid out firm expectations.

Iran’s nuclear negotiator Abbas Araghchi was quoted on state TV saying any "return by the U.S. to the nuclear deal does not require any negotiation and the path is quite clear."

"The U.S. can return to the deal and stop breaching the law in the same way it withdrew from the deal and imposed illegal sanctions on Iran," Araghchi said.