The U.S. reported more than 126,000 positive cases and more than 1,000 deaths from COVID-19 on Saturday, according to the university.

Coronavirus cases around the world surpassed 50 million on Sunday and more than 1.2 million deaths from the disease  had been recorded worldwide since the pandemic started.

The grim milestone comes as pharmaceutical giant Pfizer announced promising results from its vaccine trial Monday and said it was on track to file an emergency use application with regulators later this month.

RELATED: COVID-19 vaccine: Who will get the first doses?

Over the past two weeks, the number of confirmed COVID-19 cases has risen nearly 65%. The seven-day rolling average for daily new cases in the U.S. went from 66,294 on Oct. 25 to 108,736.7 on Sunday. In the past week, one of every 433 Americans was diagnosed with COVID-19, and hospitals in several states are running out of space and staff.

President Donald Trump throughout his campaign said that the nation — even as the infection rate surged to record highs — was rounding the corner on the coronavirus and that a vaccine was imminent. Vice President Mike Pence was holding a meeting of the White House coronavirus task force on Monday.

Pence tweeted that Pfizer's reported progress was “HUGE NEWS" and suggested it was the result of a “”public-private partnership forged" by Trump. Pfizer has funded all its own research. It has a contract to sell doses to the U.S. government if a vaccine is approved but has insisted on handling its own shipping.

The White House task force, which includes the federal government's leading infectious disease expert Dr. Anthony Fauci, has been diminished in recent months as Trump grew impatient with efforts to slow the virus that were having a deleterious impact on the economy.

Meanwhile, President-elect Joe Biden on Monday implored Americans to wear masks to slow the spread of the coronavirus.

“We could save tens of thousands of lives if everyone would just wear a mask for the next few months. Not Democratic or Republican lives, American lives,” Biden said. “Please, I implore you, wear a mask.”

Public health officials warn that the nation is entering the worst stretch yet for COVID-19 as winter sets in and the holiday season approaches, increasing the risk of rapid transmission as Americans travel, shop and celebrate with loved ones. 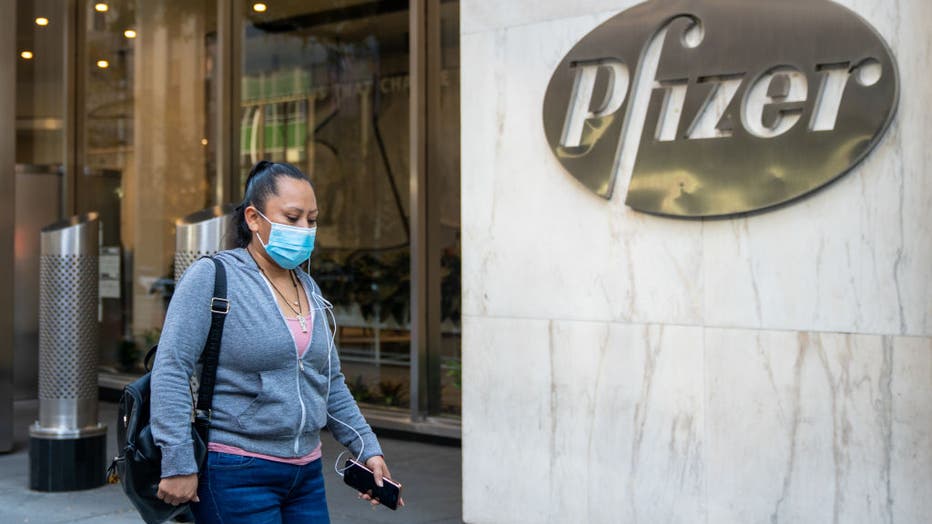 FILE - People walk by the Pfizer headquarters on November 9, 2020 in New York City.

An analysis of federal data from 20 states for The Associated Press finds that new weekly cases among residents rose nearly four-fold from the end of May to late October, from 1,083 to 4,274. Resident deaths more than doubled, from 318 a week to 699, according to the study by University of Chicago health researchers Rebecca Gorges and Tamara Konetzka.

Equally concerning, weekly cases among nursing home staff in surge states more than quadrupled, from 855 the week ending May 31, to 4,050 the week ending Oct. 25. That rings alarms because infected staffers not yet showing symptoms are seen as the most likely way the virus gets into facilities. When those unwitting staffers test positive, they are sidelined from caring for residents, raising pressures on remaining staff.

Nursing homes and other long-term care facilities account for about 1% of the U.S. population, but represent 40% of COVID-19 deaths, according to the COVID Tracking Project.

Biden signaled strongly on Monday that fighting the raging pandemic will be the immediate priority of his new administration, an abrupt shift from President Donald Trump's more unworried approach to the virus, as the nation surpassed 10 million COVID-19 cases.

In an official move, the president-elect formed a coronavirus advisory board dominated by scientists and doctors, while Trump has had a falling out with the medical experts on his own virus task force.

“The challenge before us right now is still immense and growing, and so is the need for bold action to fight this pandemic,” Biden said after being briefed on the virus. “We are still facing a dark winter.”

He called on Americans to separate politics from the virus and embrace mask-wearing.