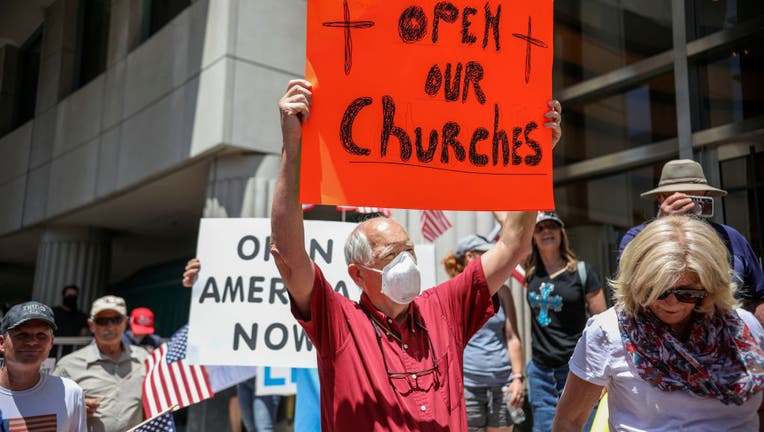 Demonstrators holding signs demanding their church to reopen, protest during a rally to re-open California and against Stay-At-Home directives on May 1, 2020 in San Diego, California. - Rallies have been held at several state capitols across the coun

In a letter to the governor, Eric S. Dreiband said that despite a coronavirus pandemic “that is unprecedented in our lifetimes,” Newsom should allow some in-person worship under the current second phase of his four-part reopening plan.

Restaurants and other secular businesses are being allowed to reopen under social distancing guidelines but not churches, which are limited to online and similar services.

That places an “unfair burden” on them that violates civil rights protections through “unequal treatment of faith communities,” the letter said.

“Simply put, there is no pandemic exception to the U.S. Constitution and its Bill of Rights,” said the letter.

Newsom this week further relaxed guidelines for counties to reopen more businesses closed under his March stay-at-home order that barred nonessential businesses to slow the spread of the coronavirus. He said churches and other religious institutions could start welcoming back the faithful for in-person services in the coming weeks.

• Some churches will reopen, they say with or without Gov. Newsom’s permission

A few churches have defied the ban on such services and sued to reopen, so far unsuccessfully.

Assemblymember Kevin Kiley said the extraordinary powers are for a governor “under conditions of extreme peril” and “were not meant to give a single person the ability to remake all of California law indefinitely.”

Sacramento County health officials said they received approval from the state Tuesday to accelerate reopening, and the county will allow “drive-through” religious services.

States and local governments have differed on whether houses of worship must meet social distancing rules. Some states have provided a degree of exemption for religious activity.

The letter by Dreiband and four U.S. attorneys for California cites a statement issued in April by Attorney General William P. Barr that argued the government can’t impose “special restrictions” on religious activity. Barr had taken the rare step of filing papers to side with a Mississippi church suing after several parishioners were ticketed for violating a stay-at-home order by attending drive-in services.

With federal prosecutors now weighing in, the national debate over how far coronavirus gathering limits can go to restrict religion could get even louder. President Donald Trump’s reelection appeal to devout conservative voters rests in part on his vocal advocacy for religious freedom, making the issue a politically potent one for his administration to take up.

The letter to Newsom doesn’t threaten immediate legal action but appears to be a warning to the most nation’s most populous state. The prosecutors follow a line of argument used in the church lawsuits in saying that the religious groups can provide safe, socially distanced worship.

“Religion and religious worship continue to be central to the lives of millions of Americans. This is true now more than ever,” the letter said. “Religious communities have rallied to protect their communities from the spread of this disease by making services available online, in parking lots, or outdoors, by indoor services with a majority of pews empty, and in numerous other creative ways that otherwise comply with social distancing and sanitation guidelines.”