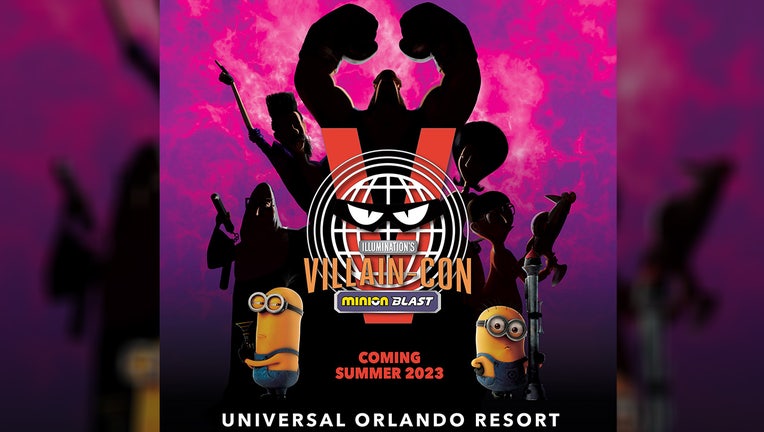 ORLANDO, Fla. - The Minions are getting ready to take over Universal Orlando!

The theme park resort announced on Thursday that its new Minion Land will open in summer 2023 at Universal Studios with a "first-of-its-kind" attraction, Illuminations's Villain-Con Minion Blast!

"This interactive, blaster game experience will invite guests to put their villainous skills to the test as they compete against each other in a bid to join the ranks of the franchise’s most infamous supervillains," Universal said in a press release.

Guests will be transported to Villain-Con – the biggest criminal convention on the planet – to take part in a competition to see if they have what it takes to become the newest member of The Vicious 6, a notorious group of supervillains from the hit film, "Minions: The Rise of Gru."

"Guests who are up for the challenge will grab an interactive blaster and step onto a motion-based pathway to put their skills to the test. They’ll wind and glide through various scenes where they earn points by blasting a variety of items and causing as much mayhem and destruction as possible. It’s a unique, mischief-filled experience that’s so much fun, it’s a crime."

The new attraction will be located where Shrek 4-D was located before closing last year.

Along with the new ride, guests can grab a bite to eat at a Minion Café, take a ride on the fan-favorite Despicable Me Minion Mayhem attraction, and check out other surprises inspired by adorable characters from the franchises.