Russia’s war on Ukraine is now in its sixth day, with a miles-long convoy of Russian tanks and armored vehicles inching closer to the Ukrainian capital and fighting intensifying on the ground.

Snow is predicted in Ukraine this week, which could impact the air operations of both Russian attackers and Ukrainian defenders, and ultimately give Ukraine a slight advantage.

Russia has yet to maintain dominance in the air despite its superior firepower, as Ukrainian forces continue to fight back against the Russian invasion, a senior defense official said during a press briefing Monday released by the Department of Defense. 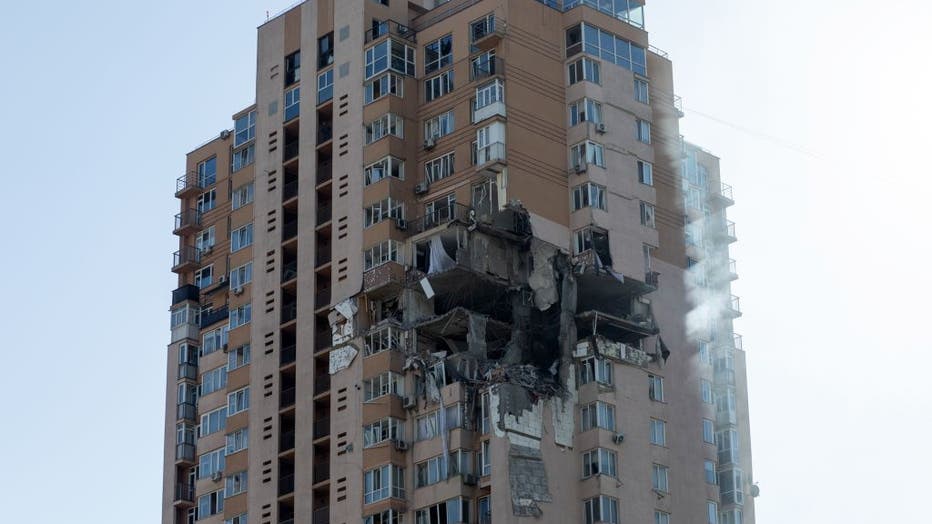 On Monday, Russian forces shelled Kharkiv, Ukraine's second-largest city, and were closing in on the capital, Kyiv.

In Kyiv, light snow is predicted for Tuesday through Thursday, with snow showers predicted on Friday, according to Fox Weather. Light snow typically has visibility greater than ½ of a mile while moderate snow has visibility between ¼ and ½ of a mile, said Seth Darling, a FOX Weather meteorologist who is also with the Pennsylvania Air National Guard 111th attack wing.

"If weather is terrible that really does work for the most part to the defender’s advantage," San Clemente said.

Every aircraft has weather limitations, and a pilot's visibility can be impacted by how thick the cloud deck is. Snow is a problem if it's falling to the point where visibility becomes an issue.

Most pilots prefer a 500-foot buffer above the ground and below the clouds at a minimum, though those preferences are more lenient during wartime, said Darling.

"If you're looking at air-to-air combat, and you have a weather system coming through … your airspace in which you can maneuver is a little bit less if you're trying to attack another aircraft," Darling added.

With poor visibility of fewer than two miles and ceilings below 1,000 feet AGL (Above Ground Level) Russian fixed-wing attack aircraft will have a very hard time avoiding terrain, identifying targets, and ensuring no friendly fire during attack runs, Clemente said.

RELATED: Boycotting vodka: Here's what you should know as businesses dump the alcohol amid the Russian invasion

A benefit for the Ukrainians is that the Russians are attacking them in their backyard. San Clemente argued that the Ukrainian forces are familiar with not only the terrain but also with what they can and can't get away with when the weather gets bad.

The defender has an advantage because they’ve typically laid out a field of fire, while the attacker is searching for targets. The snow could also make the terrain look uniform and as a result, make it harder for the Russians to see people who aren't moving, the retired general added. 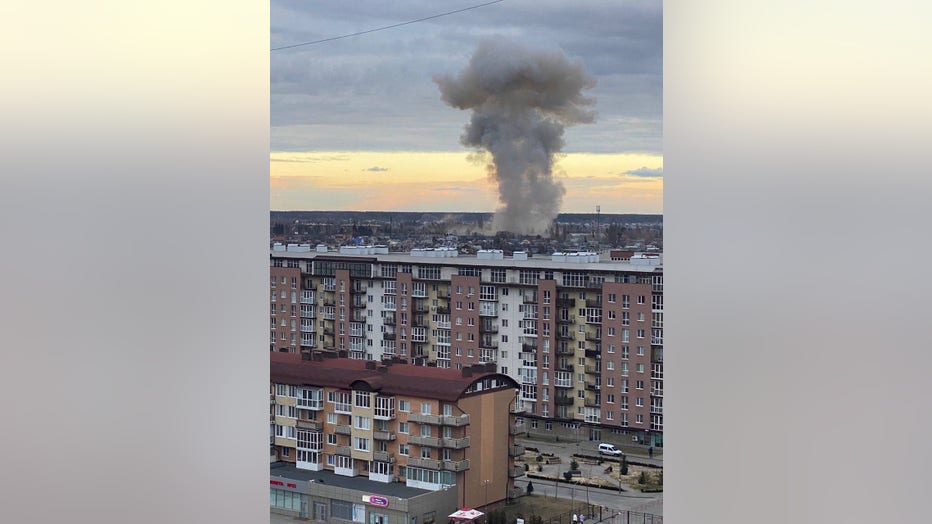 "As the defender tends to know the terrain and friendly disposition better than the attacker – the defender has the advantage," said San Clemente. "This same rule applies for attack helicopters, but the weather can be worse. To some degree, it depends on crew proficiency and terrain awareness systems on the aircraft."

Many of Ukraine's surface-to-air missiles are radar-guided and not impacted by the weather, which also makes it difficult on the Russians, he added. The weather was also a double-edged sword, Clemente said, as it makes it difficult for Ukrainians trying to provide close air support.

If Russian rotary-wing aircraft need to get close to identify targets due to poor visibility or low ceilings, San Clemente said the aircraft becomes susceptible to Ukrainian defenders' SAMs (surface-to-air missiles), which are mainly guided by infrared. An example of an IR system is the U.S. stinger missile.

The number-one way that an attacking aircraft defeats a missile being shot at it is visual acquisition, San Clemente said. He noted that the aircraft's system can warn the pilot, but without the pilot acquiring the missile itself, it can be difficult to avoid.

Both sides are well-versed in winter aerial warfare, but the heat-seeker SAM is an advantage for the Ukrainians, which will be able to better target Russian aircraft in the cold, retired U.S. Marine Corps CH-46E helicopter pilot Pete Phillips told Fox News.

Fighter jets don't get impacted as easily once they're in the air. The MiG-29 Fulcrum, which both sides fly, has intakes on the top that resemble shark gills, which are "designed to keep the engines from sucking snow in during takeoff," Phillips said.

Other aircraft at higher altitudes don't have to worry about the terrain, but they are visible to radar SAMs and counter-air aircraft. The Russians also need someone on the ground to provide detailed coordinates for targets. 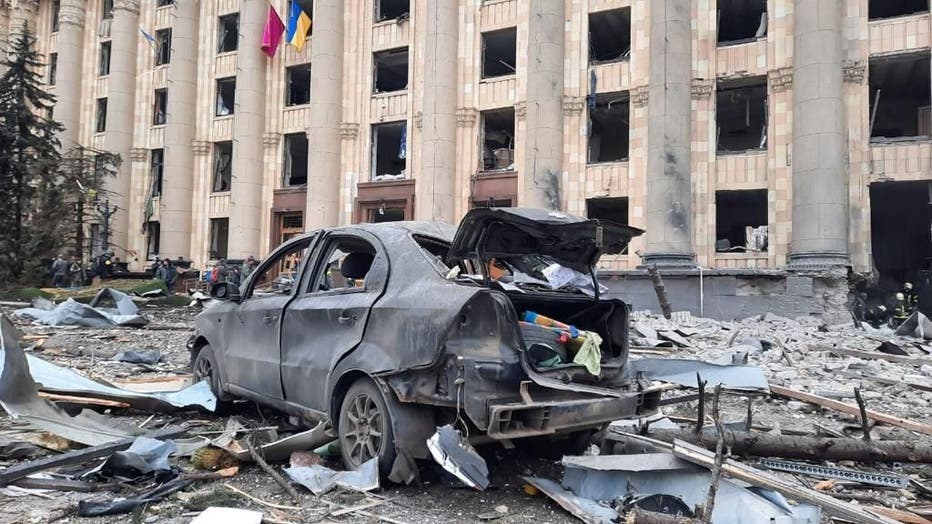 KHARKIV, UKRAINE - MARCH 01: A view of damaged Kharkiv governor's office and a wrecked vehicle is seen after the Russian army's missile attack in Kharkiv, Ukraine on March 1, 2022. (Photo by State Emergency Service of Ukraine/Anadolu Agency via Getty 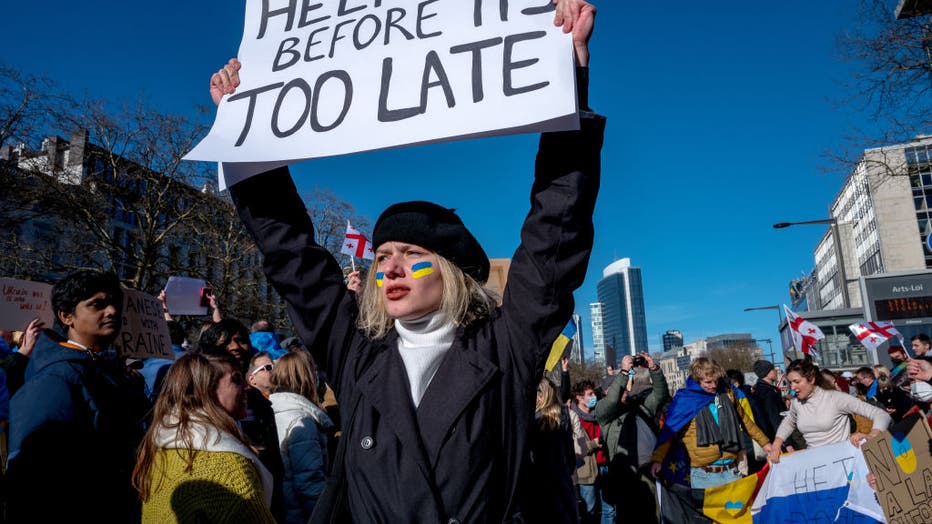 BRUSSELS, BELGIUM - FEBRUARY 26: A protester holds a banner calling for imminent help for Ukraine during a demonstration against Russia's invasion of Ukraine held in front the building of the Permanent Mission of Russia to the E.U. on February 26, 20

"Further, they must have GPS-guided weapons to achieve any hope of accuracy," San Clemente told Fox News. "The defender may also employ GPS jamming and other electronic defensive measures to mitigate the accuracy of enemy air attack. This does not, of course, preclude the attacker from bombing with less than desired discrimination."

Rep. August Pfluger, R-Texas, who flew F-22 fighter jets during his 20 years in the Air Force, warned that civilian casualties in Ukraine could increase due to bad weather.

| COMPLETE COVERAGE OF WAR ON UKRAINE |

"Their willingness to strike civilians and to have indiscriminate bombings or strikes throughout the first couple days of the conflict will only be magnified by bad weather and I will expect civilian casualties to increase," he said.

Pfluger noted that if the Russian forces were not operating together, bad weather will severely impact them.

"I think what we're seeing right now is a real lack of integration between the land forces and Russian air forces," Pfluger told Fox News. "It seems like they still do not have the full operational capability to integrate targets in effect between land and air components which you see in our military and NATO."

Russians have their own brand of guided weapons, just like the U.S., so they won't be impacted very much when targeting a fixed location. San Clemente noted that bad weather won't impact their ability to put weapons on fixed targets.

Darling noted that snow, in regard to troop movement and ground forces, was a "whole 'nother ball game."