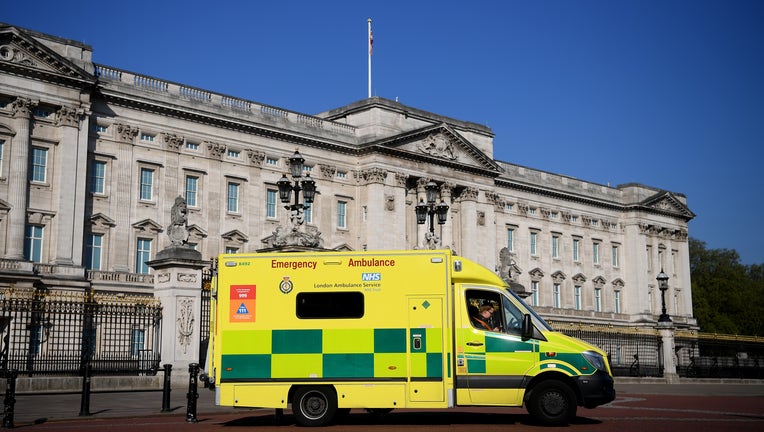 LONDON, ENGLAND: A Ambulance is seen parked up outside Buckingham Palace on April 26, 2020 in London, England . (Photo by Alex Davidson/Getty Images)

UNITED KINGDOM - People across the United Kingdom observed a minute of silence Tuesday morning to remember the more than 100 healthcare workers who have died from the coronavirus after serving on the front lines of the pandemic.

The moment of silence comes a day after the government announced that the families of National Health Service and social care staff who died after contracting COVID-19 will each receive a payment of more $78,500 in compensation.

At 11 a.m. BST, British Prime Minister Boris Johnson, now in his second day back to work after recovering from the virus, was photographed standing the recommended 2 meters (6.5 feet) apart from Cabinet Secretary Mark Sedwill and Chancellor Rishi Sunak to observe the minute of silence.

In Scotland, First Minister Nicola Sturgeon bowed her head outside St Andrew's House in Edinburgh. The assembly chamber in Northern Ireland halted business out of respect. First Minister Mark Drakeford and other Welsh ministers were also among those observing the minute of silence in Wales.

The flag was lowered to half-staff outside the Lancashire Teaching Hospitals NHS Foundation Trust building, the BBC reported, as workers at hospitals across the country took a brief pause.

Medical staff outside Salford Royal Hospital were visibly emotional during the silence, and transportation workers in London parked their buses and stood together in the streets, while maintaining appropriate social distancing, to pay their respects.

Dame Donna Kinnair, head of the Royal College of Nursing, told the BBC she was "heartened to hear how many people took part.”

U.K. Health Secretary Matt Hancock announced Monday that at least 82 NHS staff and 16 social staff workers have died at hospitals in England after contracting COVID-19. A separate BBC analysis identified at least 114 healthcare workers across the U.K. who have died after testing positive for COVID-19.

Meanwhile, a BBC investigation released Monday revealed there were no gowns, visors, swabs or body bags in the government stockpile in the early stages of the outbreak in the U.K. The report was published weeks after NHS doctors, some of whom have since died from COVID-19, said they were being put at risk because of a shortage of personal protective equipment.

"Workers should not be sent into danger without the correct PPE," Archbishop of York John Sentan said, adding that those on the front line be "given all the safety equipment they need.”

Reacting to the report, government minister Victoria Atkins said "a billion pieces of PPE" have been distributed across the country since the outbreak began, and, like in all other countries, the virus “is unprecedented and the requirements for PPE have risen exponentially and we're doing our absolute best to address those needs and will continue to do so.”

The United Kingdom, as of Tuesday, ranked fourth in global coronavirus fatalities, with at least 21,092 deaths. It was the sixth-most infected nation in the world, with at least 158,353 confirmed cases, according to statistics gathered by Johns Hopkins University.