A team of researchers at the University of Central Florida are working to stop the spread of coronavirus by developing a cough drop.

ORLANDO, Fla. - It’s well known by now that COVID-19 spreads primarily through airborne saliva particles in sneezes and coughs, so two UCF scientists had an idea: Change the way people’s spit works to stifle the spread.

Dr. Kareem Ahmed and Dr. Mike Kinzel just received a $200,000 grant from the National Science Foundation to expand their idea and potentially develop a sort of "anti-COVID cough drop."

"So, basically, what we're aiming for is kind of like lozenges or gums that alter your fluid properties in your saliva,” Dr. Kinzel said.

The idea would be to make saliva fly into the air less during a cough or sneeze, and instead, fall to the ground where it’s more easily cleaned up and less likely to spread an illness, Kinzel said.

The duo put the idea into an experiment where they looked at side-by-side sneezes and measured the outcomes.

One sneeze would be regular unaltered saliva, and the other, Dr. Ahmed said, had corn starch added to the person’s saliva. 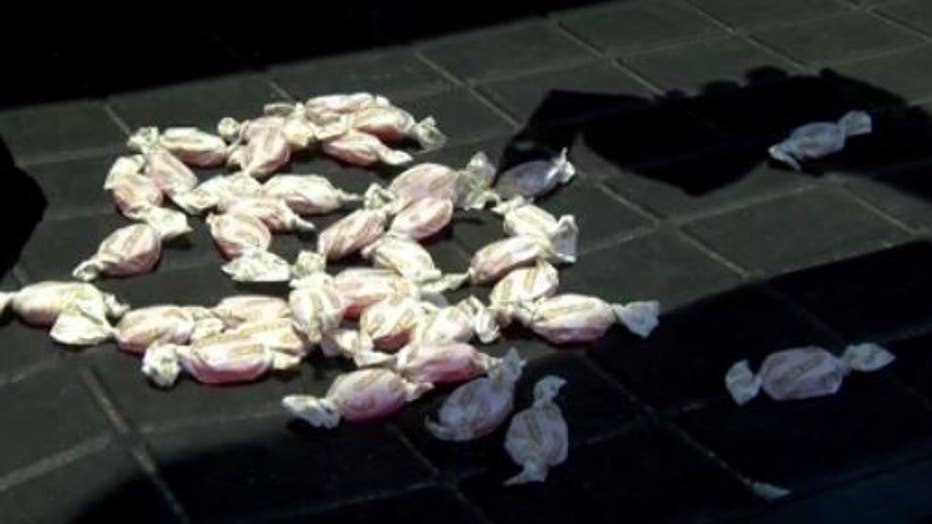 "Cornstarch was one of the compounds you can use to actually thicken the saliva,” Ahmed said.

The result was larger spit droplets that would mostly fall to the ground instead of projecting, the duo found.

So as Dr. Kinzel said, they hope to create a sort-of cough drop or candy that could be used in a close-quarters indoor space that would thicken a person’s saliva slightly and lower the need for extensive social distancing.

"In theory, when you go to Publix, they could just give you this lozenge and everyone's just taking it on their way,” he said.

Now, they’re just trying to find a more comfortable compound than cornstarch for people to toss in their mouth when they’re out and about.

Dr. Ahmed said they did discover that sugar, which is present in many current cough drops, actually makes saliva more watery and could have the opposite effect they’re looking for.

So, Kinzel said they believe a new compound could create an even more effective cough drop for dealing with most airborne illnesses, not just COVID.

Kinzel and Ahmed are actually both mechanical and aerospace engineers at the University of Central Florida, but they said their efforts to thicken liquid substances in their field could lead them to pitching this idea for the fight against COVID-19.

The project is still in the development phases, but they hope it will proceed quickly once they finalize their compound.