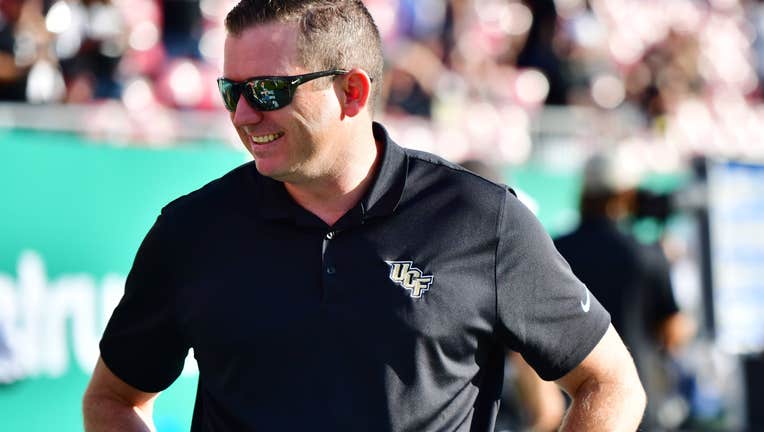 The UCF Knights Athletic director Danny White stands on the sidelines during warm-up before a game against the South Florida Bulls at Raymond James Stadium on November 23, 2018 in Tampa, Florida. (Photo by Julio Aguilar/Getty Images)

"While I am very excited about the opportunity to become the next Director of Athletics at the University of Tennessee, this was an excruciatingly difficult decision for us as we have absolutely loved our time here at UCF," he said.

He added that "when I took the job, our goal was to become one of the nation’s premier destinations for coaches and student-athletes. I also had a goal to excite our student body, staff and faculty, alumni and the Central Florida community. With the tremendous support of our student-athletes, coaches, staff, donors, students and all of Knight Nation, we certainly accomplished those goals."

White went on to thank the school's Shareholders Society members for helping build a "monster Athletics Department," President John Hitt for "giving me the opportunity to come to UCF," President Dale Whittaker and Interim President Thad Seymour for "all of their support," and President Alex Cartwright.

"Under Alex’s leadership, the future is very bright at UCF. It was extremely difficult to tell Alex that I was leaving as he is a tremendous leader and friend," he explained.

White ended his note by stating that "UCF is definitely in great hands, and I look forward to watching continued success of this phenomenal University. The White family will always be Knight fans!"

The university has already started a national search for a new Director of Athletics.

"I will personally miss working closely with Danny. Danny will leave UCF with incredible momentum and a strong foundation for success, including a culture of innovation and winning with integrity and strengthening UCF's national reputation well beyond the sports world," President Alexander Cartwright said in a message to Knight Nation. "I am committed to working with all of you to build on our momentum to achieve sustained excellence in competition, in the classroom and beyond."

MORE NEWS: Biden signs 10 executive orders on pandemic, warns things will ‘get worse before they get better’

Cartwright added that "we immediately will begin a national search for a new vice president and director of athletics. I am certain that we will attract premier candidates who are eager to work alongside our talented coaches and athletics staff and who share our commitment to our student-athletes' success in the classroom and preparing them well for careers after they graduate. And I know they will also be excited about joining our fans in Knight Nation, just as I was when I became president!"