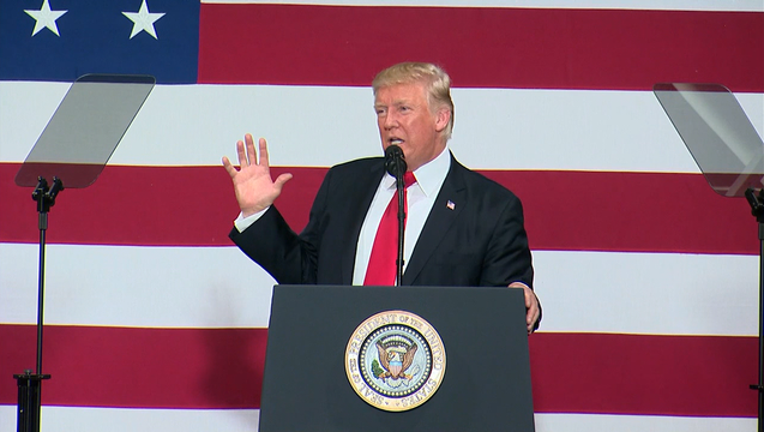 WASHINGTON (AP) - President Donald Trump says "all of America" is grieving with those who lost loved ones because of Harvey. Trump is also commending the emergency responders, whose selfless devotion he says has saved lives.

Trump visited Corpus Christi, Texas, and Austin on Tuesday for briefings on Harvey's devastation. Harvey came ashore Friday in Texas as a powerful hurricane, but has been downgraded to a tropical storm. He plans a return visit to other affected parts of Texas on Saturday. More than 20 confirmed deaths have been recorded.

Trump says to everyone who has been affected by the storm that "we are here with you today, we are with you tomorrow and we will be with you every single day after to restore, recover and rebuild."

President Donald Trump says his "heart goes out even more" to Texans after witnessing "first hand" what he calls the "the horror & devastation" caused by Harvey.

Trump's Wednesday morning tweet comes the day after he traveled to Texas to meet with state and local officials.

Trump kept his distance from the damage during that visit, avoiding areas ravaged by flooding.

The minimal damage Trump did see -- some boarded-up windows, uprooted trees and fences askew -- was through the tinted windows of his SUV as he traveled from the Corpus Christi airport to a firehouse in a city that's already nearly back to normal.

Aides say Trump plans to return to Texas on Saturday to survey damage and meet with people displaced by the storm.