WASHINGTON - Former President Donald Trump on Thursday defended some of his supporters who rioted at the U.S. Capitol in an attack that led to five deaths, claiming they posed "zero threat" to the lawmakers.

Congress had assembled on Jan. 6 in a special joint session to certify the Electoral College vote that confirmed Joe Biden's victory in the presidential race. At least five people, including a Capitol Police officer, died as a result of the violence at the Capitol by the mob of Trump supporters. Two other officers died by suicide after.

Trump complained to Ingraham that law enforcement was "persecuting" the Capitol rioters, while "nothing happens" to left-wing protesters. He did acknowledge that those who stormed the Capitol "went in and they shouldn’t have done it."

But he added: "Some of them went in and they’re, they’re hugging and kissing the police and the guards. You know, they had great relationships. A lot of the people were waved in and then they walked in and they walked out." 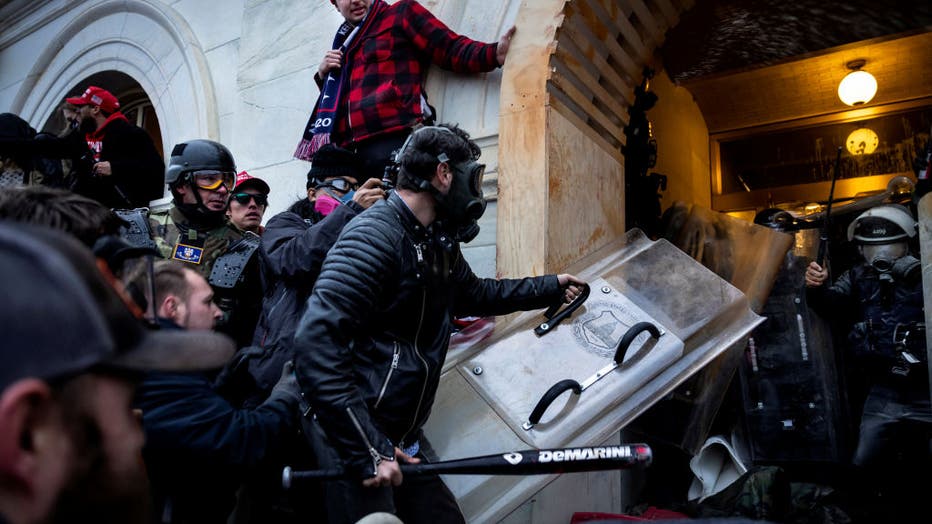 Trump supporters clash with police and security forces as people try to storm the U.S. Capitol on Jan. 6, 2021 in Washington, D.C. (Photo by Brent Stirton/Getty Images)

But as the events unfolded, lawmakers and aides were forced to flee and hide. Then-Vice President Mike Pence was evacuated before rioters managed to enter the Senate chamber, damaging property, taking selfies and even taking a seat at the presiding officer’s chair where Pence had sat just moments before.

Photos of the aftermath showed ransacked offices, broken windows and overturned tables. Rioters were pictured tearing through Democratic House Speaker Nancy Pelosi’s office, with one man posing for photos with his feet propped up on a staffer’s desk.

More than 300 people have been charged with federal crimes in connection to the riot, many of whom are accused of assaulting law enforcement officers. Authorities have said they believe at least 100 more could face charges.

A lone police officer diverted a group of protesters away from the Senate floor as pro-Trump demonstrators breached the Capitol building on Jan. 6 (Credit: Igor Bobic/ HuffPost via Storyful)

U.S. Capitol Police officer Brian Sicknick, who collapsed and later died the next day, was attacked with bear spray during the siege. George Tanios, 39, of Morgantown, West Virginia, and Julian Khater, 32, of Pennsylvania, were arrested earlier this month for the assault and are facing an array of charges.

A former special forces soldier is also accused of assaulting police and spearing one in the face with a flag pole and could face up to 20 years in prison.

Trump had repeatedly claimed without evidence that there was widespread fraud in the election and that it was "stolen" by Biden. But his claims were roundly rejected in the courts, including by judges appointed by Trump and election officials — both Republican and Democratic alike. Trump’s own former attorney general, Bill Barr, said there were no problems or fraud that would change the outcome.

On the morning of the Jan. 6 insurrection, the former president spoke at a rally outside the White House, urging a mob of his supporters to "fight like hell" for him at the Capitol.

A week later, the House impeached Trump for the second time, but the Senate eventually acquitted him on the charge of inciting the attack.

The Associated Press contributed to this story. It was reported from Cincinnati.