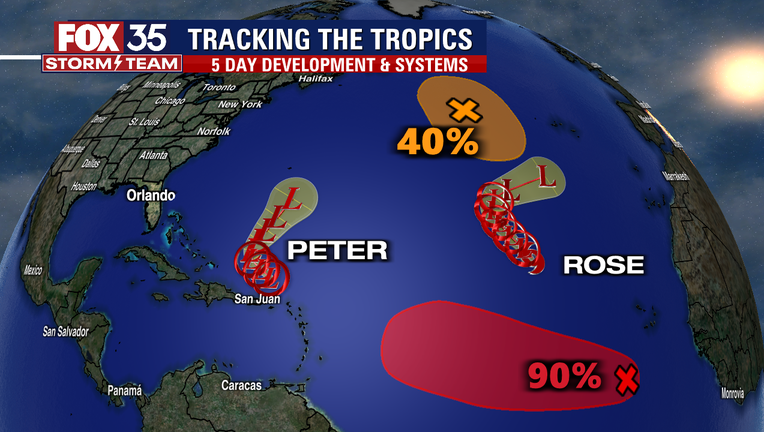 ORLANDO, Fla. - As four systems churn in the Atlantic, Florida remains in the clear -- for now.

On Tuesday afternoon, Peter was downgraded into a tropical depression and is moving west-northwest about 160 miles north-northeast of Puerto Rico. The National Hurricane Center (NHC) said that the depression is expected to remain well north of the Virgin Islands and Puerto Rico on Tuesday. It should move well east of the southeastern Bahamas over the next few days.

They said that it has maximum sustained winds of 35 mph. Additional weakening is expected over the next few days. It could degenerate into a remnant low by Thursday.

Meanwhile, Tropical Storm Rose is moving toward the northwest near 10 mph, forecasters said. It should move toward the north more over the next few days and then northeast on Friday.

It is said to have maximum sustained winds near 40 mph. It could decay into a tropical depression on Tuesday evening and then a remnant low by Friday.

The FOX 35 Storm Team is also keeping track of a small but concentrated area of showers and thunderstorms redeveloping along a tropical wave about a few hundred miles southwest of the Cabo Verde Islands. The NHC said that environmental conditions are expected to be conducive for development and a tropical depression is likely to form by Thursday or Friday while the system moves westward. Formation chances over the next five days at 90 percent.

Forecasters also said that there is a gale-force, non-tropical low-pressure system, which are the remnants of Odette, hundreds of miles west-northwest of the westernmost Azores. This low could develop some subtropical characteristics over marginally warm waters over the next few days. By the end of the week, this system is expected to encounter more hostile environmental conditions. Formation chances are at 40 percent over the next five days.

Watch FOX 35 News for the latest throughout hurricane season.