A woman frantically called 911 at 6:44 Tuesday morning reporting a car on fire that had apparently driven off the road.

ORLANDO, Fla. - A woman frantically called 911 at 6:44 Tuesday morning reporting a car on fire that had apparently driven off the road.

"It’s still burning…I think the fire is getting stronger!" she said.

"Is anyone trapped inside?" a 911 operator asked.

Investigators don’t believe foul play was involved but say it’s a strange case and security cameras are helping to piece the puzzle together.

"After looking at video from the Misty Oak apartment complex, we now believe this crash happened around 12:32.  In the video, you can see the vehicle make a left turn out of the apartment complex on the side street and kind of just slide off the road into the ditch.

"You see from the video the male occupant get in and out of the car several times. A car stops to help him. Looks like they try and pull the vehicle out of the ditch unsuccessfully. 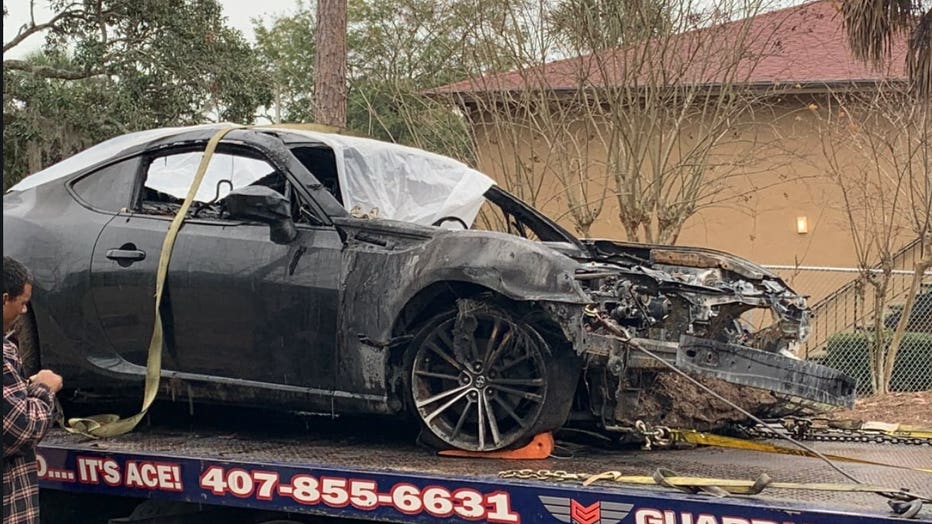 "Fire rescue personnel tell us they talked to the gentlemen. He was not hurt," Lt. Kim Montes says.

She tells FOX 35 News that OCFR left and called troopers to let them know about the crash. Investigators say the surveillance video shows the car starts catching fire at 6:39 a.m.  Lt. Montes says her trooper arrived on the scene at 6:48 a.m. after finishing up on another call.

"He tried to approach the car. It was completely engulfed," Lt. Montes said.

Moments later, OCFR arrived back on the scene, extinguished the flames only to find a man dead in the driver’s seat.

Troopers are now hoping the medical examiner’s office and fire investigators can piece together why the car caught fire and why the driver never got out of the car.

"That is what we are wondering unless the possibility of him being overcome with smoke prior to the fire engulfing the vehicle. That’s where the medical examiner hopefully will be able to tell us some more information about that," Lt. Montes said.

Right now troopers are not releasing the victim’s name as they make next of kin notification.