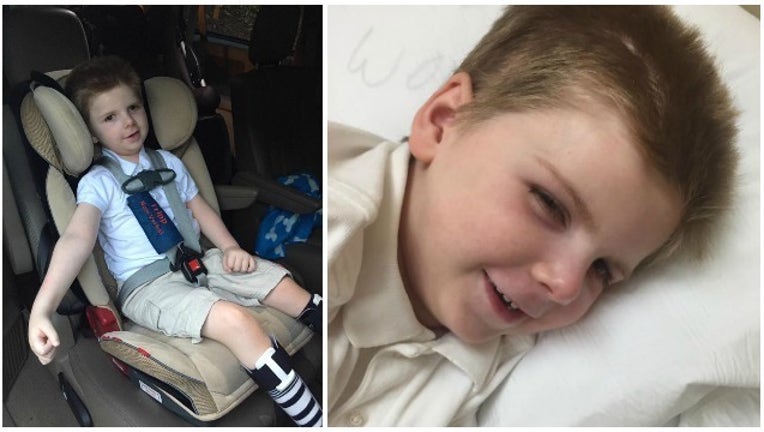 The Jefferson, Georgia boy's story has captured the hearts of thousands as he continues to recover after a devastating accident in October of 2012 when he suffered severe brain injuries. He was critically injured when a tree limb fell on him outside of his Winder day care center.

Tripp spent months at Children's Healthcare of Atlanta following the accident and over the last few years he's underwent a number of surgeries. The 5-year-old's most recent surgery took place in late June. Doctors performed back surgery to help straighten his spine.

Wednesday, on Facebook, mother Stacy Halstead said Tripp was completely healed after one of his incisions had opened up.

"Tripp's incision is healed!" Halstead said. "It looks great now and it means he can swim again!"

Halstead said Tripp had "magic rods" placed in his back. The rods get turned every three months, to slowly help straighten his spine.

"We have our first appointment this month," Halstead said.

Halstead shares every milestone on Facebook as Tripp continues to work toward full recovery. Last month, she shared video of her son moving his head on his own.

"We are working so hard everyday on head control," Healstead said.

Halstead said she's extremely happy with Tripp's progress and he's doing an awesome job at getting her attention. She said on Facebook last month she believes he's trying to say the word "hi," which is something they've worked on since Tripp was injured.

"He amazes me more and more everyday," Halstead previously said on Facebook.

Tripp's mother said she believes the positive prayers and support her son constantly receives on Facebook has helped him progress and heal. Follow Tripp Halstead Updates on Facebook for more.