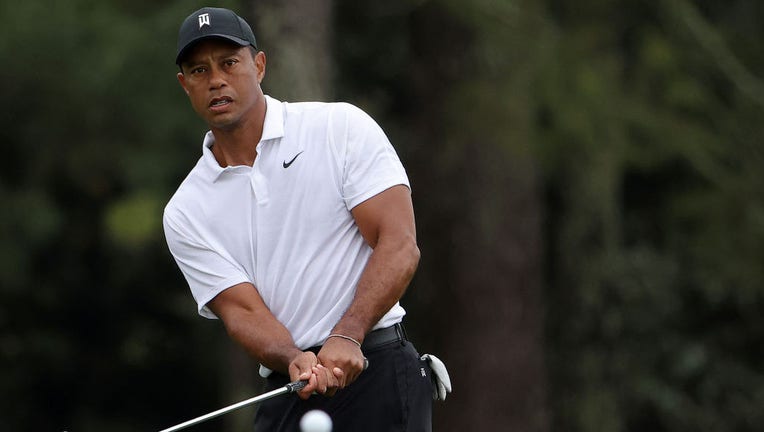 Tiger Woods of the United States plays a shot on the 18th hole during a practice round prior to the Masters at Augusta National Golf Club on April 6, 2022, in Augusta, Georgia. (Photo by Jamie Squire/Getty Images)

AUGUSTA, Ga. - Tiger Woods, a little over a year after almost losing a leg in a catastrophic car crash, is planning to play this week in the Masters in an improbable sports comeback.

The five-time champion at Augusta National made the announcement on Tuesday. The Masters opening round on Thursday would mark the first time Woods competes against the world's best players since Nov. 15, 2020, which was the final round of that year's pandemic-delayed Masters.

He had his fifth back surgery two months later and was still recovering from that on Feb. 23, 2021, when he crashed his SUV over a median on a coastal road in Los Angeles’ Rolling Hills Estates community and down the side of a hill. 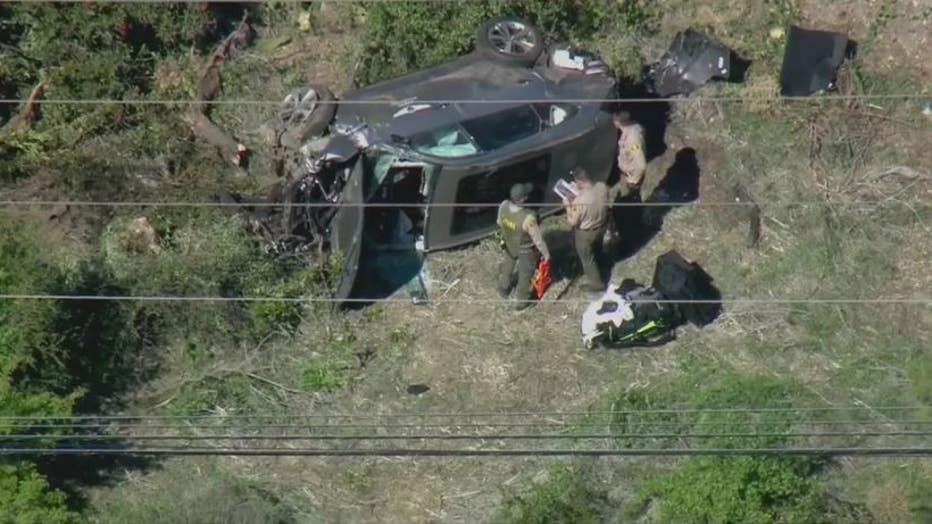 Woods' injuries from that crash were so severe that doctors considered right leg amputation, before reassembling the limb by placing a rod in the tibia and using screws and pins to stabilize additional injuries in the ankle and foot.

"It’s been a tough, tough year and a lot of stuff that I had to deal with that I don’t wish on anyone," Woods told reporters on Tuesday, "but here we are at Masters week."

Here’s a look at some notable events in Woods’ recovery since the crash:

The famous golfer suffered serious injuries in the Feb. 23 crash when he struck a raised median around 7 a.m. PT in Rolling Hills Estates, just outside Los Angeles. The Genesis SUV he was driving crossed through two oncoming lanes and uprooted a tree on a downhill stretch that police said is known for wrecks.

He was unconscious when a witness first approached the mangled SUV. A sheriff’s deputy said the athlete later appeared to be in shock but was conscious and able to answer basic questions.

How did Tiger Woods' crash happen? Stu Mundel from Fox 11 Los Angeles breaks it down

Tiger Wood's is in serious condition following a single-car crash in Rancho Palos Verdes, California. Fox 11's Stu Mundel goes through how this crash may have happened, leading to his SUV ending up on a steep hill.

A day after the crash, Los Angeles County Sheriff Alex Villanueva announced his department would not file criminal charges against Woods. Villanueva said the crash "remains an accident," according to FOX 11 Los Angeles.

"An accident is not a crime. They do happen, unfortunately,'' the sheriff added.

Villaneuva reiterated that there were no indications Woods was impaired in any way, saying "he was lucid, there was no odor of alcohol, no evidence of any medication, narcotics or anything like that that would bring that into question.''

Woods also issued a statement on Twitter thanking everyone for their "overwhelming support and messages."

Woods released a statement confirming that he had returned to his home in Florida to recover.

"Happy to report that I am back home and continuing my recovery. I am so grateful for the outpouring of support and encouragement that I have received over the past few weeks," Woods said. "I will be recovering at home and working on getting stronger every day."

The Los Angeles County sheriff said detectives had determined what caused Woods to crash his SUV but declined to release details, citing unspecified privacy concerns for the golf star.

"A cause has been determined, the investigation has concluded," Villanueva said during a live social media event.

Villanueva reveals that Woods' SUV was traveling between 84 and 87 mph in a 45 mph zone. The speed he was driving at was "unsafe for the road conditions," Villanueva added.

Authorities said that there were "no signs of braking" at the time Woods' crash and investigators believed he may have hit the acceleration by accident when he tried to regain control of his vehicle. The sheriff added that there was no evidence of impairment.

"The cause of the collision was the speed and the inability to maintain the roadway," Lomita Sheriff Station Capt. James Powers said, according to FOX 11 Los Angeles.

Woods also issued a statement on Twitter thanking the Good samaritans who came to "assist me and called 911," as well as the emergency responders.

On Instagram, Woods shares a photo of himself on crutches alongside his "rehab partner," his dog.

Woods gives an interview with Golf Digest, saying his injuries from the crash were "more painful than anything" he had ever experienced.

"This has been an entirely different animal," Woods said. "I understand more of the rehab processes because of my past injuries, but this was more painful than anything I have ever experienced."

When asked about his hopes of playing golf again, Woods had no comment but added: "My physical therapy has been keeping me busy. I do my routines every day and am focused on my No. 1 goal right now: walking on my own. Taking it one step at a time."

A photo on social media showed Woods back on the golf course with his son, Charlie. He was pictured wearing a compression sleeve on his right leg, standing without crutches.

Woods posted a photo on social media of him hitting a golf ball on a driving range with the caption: "Making progress." It has nearly 8 million views since being shared.

Woods gave an in-depth interview to Golf Digest and opened up about his year and a possible return to golf. He compared the Masters to climbing Mt. Everest.

"I don’t have to compete and play against the best players in the world to have a great life. After my back fusion, I had to climb Mt. Everest one more time. I had to do it, and I did. This time around, I don’t think I’ll have the body to climb Mt. Everest, and that’s OK. I can still participate in the game of golf. I can still, if my leg gets OK, I can still click off a tournament here or there. But as far as climbing the mountain again and getting all the way to the top, I don’t think that’s a realistic expectation of me."

Ten months after his crash, Woods returned to competition with his 12-year-old son in the PNC Championship at the Ritz-Carlton Golf Club in Orlando, Florida. Wearing matching red polos, they finished second.

Woods rode in a golf cart during the event, but then walked the final 200 yards on the 72nd hole with his son, according to ESPN. 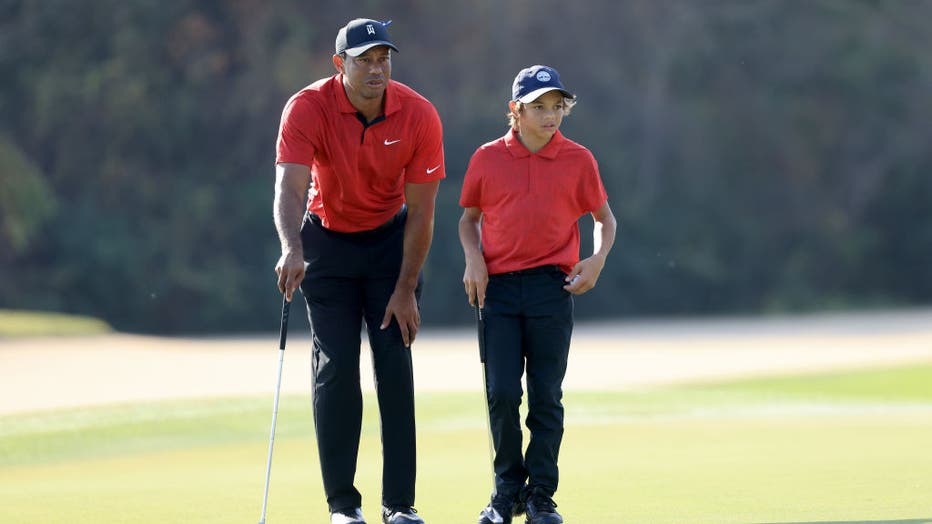 Tiger Woods and Charlie Woods look over a shot on the 15th hole during the final round of the PNC Championship at the Ritz Carlton Golf Club Grande Lakes on Dec. 19, 2021, in Orlando, Florida. (Photo by Sam Greenwood/Getty Images)

Woods joined the broadcast booth with CBS Sports analysts Jim Nantz and Sir Nick Faldo during The Genesis Invitational and served as tournament host with his TGR Foundation and expressed frustration about tining around a potential return.

"You will see me on the PGA TOUR, I just don't know when and trust me I'd love to tell you that I'll be playing next week," Woods said on the broadcast, according to a PGATour.com recap. "But I don't know when, which is frustrating in that sense, because I've been down this road before with my back when I didn't know when I was going to come back."

Woods was inducted into the World Golf Hall of Fame and was introduced by his daughter, Sam.

"Recently, Dad had to train harder than ever," Sam Woods said, according to ESPN. "About a year ago you were stuck in a hospital bed at one of your ultimate lows and one of the scariest moments of your life and ours. We didn't know if you'd come home with two legs or not. Now, not only are you about to be inducted into the Hall of Fame, but you're standing here on your own two feet."

"This is why you deserve this, because you're a fighter. You've defied the odds every time, being the first Black and Asian golfer to win a major, being able to win your fifth Masters after multiple back surgeries and being able to walk just a few months after your crash," she added.

Just days away from the start of the Masters, Woods announced that he would be traveling to Augusta to "continue my preparation and practice." He added that it would be "a game-time decision on whether I compete."

This story was reported from Cincinnati. The Associated Press and FOX 11 Los Angeles contributed.