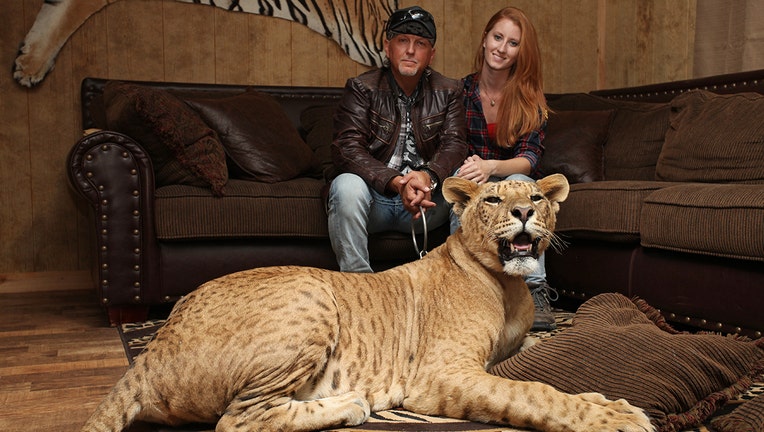 Jeff Lowe and Lauren Dropla with Faith the liliger at their home inside the Greater Wynnewood Exotic Animal Park on September 28, 2016 in Wynnewood, Oklahoma.

Authorities raided Jeff Lowe’s Thackerville, Oklahoma zoo once again and seized 68 animals that were being held there by the "Tiger King" star.

Lowe, who appeared in the highly popular 2020 Netflix documentary series, was the subject of a raid by U.S. law enforcement agents led by the U.S. Fish and Wildlife Service on Monday, according to a press release from the U.S. Department of Justice.

Lowe is an exotic animal exhibitor and dealer who took over control of most of the animals being held by Joseph Maldonado-Passage, also known as Joe Exotic, after he went to prison on a failed murder-for-hire plot targeting his rival, Big Cat Rescue CEO Carole Baskin.

The DOJ confirmed that 68 protected lions, tigers, lion-tiger hybrids, and a jaguar were taken from the Tiger King Park after obtaining a warrant for "ongoing Endangered Species Act (ESA) violations."

"The U.S. Department of Agriculture’s (USDA) Animal and Plant Health Inspection Service has conducted three inspections of Tiger King Park since mid-December 2020. During these inspections, the Lowes received citations for failing to provide the animals with adequate or timely veterinary care, appropriate nutrition, and shelter that protects them from inclement weather and is of sufficient size to allow them to engage in normal behavior," the press release from the DOJ reads. "The Lowes were recently found in contempt after months of noncompliance with court orders requiring the Lowes, in part, to employ a qualified veterinarian and establish and maintain a program of veterinary care that meets the requirements of the Animal Welfare Act."

Lowe confirmed the news of the raid to TMZ, noting that 40-50 federal agents swarmed his zoo at 7 a.m. with a search warrant and reportedly told him to stay inside his house or he’d be arrested. Lowe told the outlet that he estimated roughly 70 animals were seized and that they were particularly interested in finding tiger cubs, which he said he did not have.

This is the second time this month that Lowe has been raided for exotic animals.

A press release from the advocacy group Animal Wellness Action noted that authorities cited the Endangered Species Act and the Animal Welfare Act in the warrant from a federal judge in the Eastern District of Oklahoma. In granting the motion for a preliminary injunction and a separate motion for a temporary restraining order earlier this year, the judge said Lowe had to relinquish his tiger cubs of up to a year in age so that they could be placed in reputable sanctuaries, never to be used as exhibits again.

Representatives for Lowe did not immediately respond to Fox News’ request for comment.