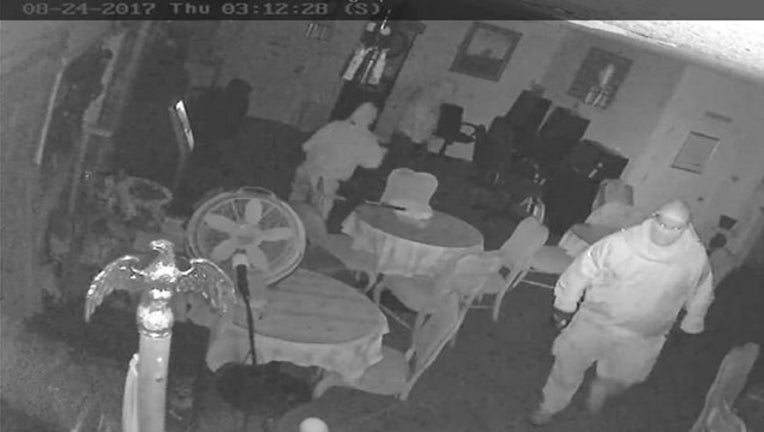 SAINT CLOUD, Fla. (WOFL FOX 35) - Law enforcement in Osceola County are looking for at least 3 people who broke into the Amvets Post off of Dear Run Road in Saint Cloud.

Post 33 Commander John Wood said he got the call Thursday morning on his way to work. Someone else also driving to work near the post had noticed the front door damaged and hanging open, and contacted the cops to warn them.

When John arrived and got inside he found the Amvets Post’s electronic games all busted open with the money inside missing. He said the ATM at the front of the small building had also been pulled out by force, and it appeared to have damaged the walls, flooring, and doors on the way out.

"They had put a strap, a rope, a chain or something around it and just yanked it out the front door,” said Wood.

Employees checked the surveillance footage from the night before. On their exterior cameras they said headlights could be seen shining into the parking lot, but before anything or anyone appeared before the cameras, the images went dark.

It turns out the intruders had spray painted the lenses black to show themselves as little as possible.

After breaking the screen door, which Wood said wasn’t even locked, the crooks shattered the front glass door.

On the interior cameras, three guys could be seen crawling through the wreckage and quickly blacking out another camera. Then two of the men with concealed faces could be seen putting down a sledgehammer and proceeding to break into the game machines. After about 30 seconds, the third guy blacked out that final camera.

Wood said they seemed to know where they were going and he believes they may have cased the bar at some point.

The Osceola County Sheriff’s Department said it appeared to be two males and a female in the video, and the total cost of the damage is still unknown at this time.

Many patrons at the post Friday used words like ‘disgusting’ and ‘scumbags’ to describe the people who broke in.

Wood said the Amvets are a nonprofit organization and the money they make at the post goes to helping veterans in need.

The post also uses their resources to raise funds for non-veteran causes in the community. Wood said right now they’re working to send a terminally ill child to Hawaii so they can see their birthplace.

He said the this break-in has only hurt those efforts.

Luckily post members and friends in the community helped them replace the glass door and clean up some of the damage so the post didn’t have to close for any period time.

Wood said they’re also using their Friday night fish fry this week as a way to recoup some of their losses and try to recover quickly from the crime, but he said they truly hope to someday see the people who did the damage pay up for it from behind bars.

"Everybody bleeds the same color, back your brother, do what's right. Do what's right it'll come back to you, if you don't, these guys are going to find out what happens,” said Woods.