SAVANNAH, Ga. - Savannah Police Chief Roy Minter is singing the praises of seven of his officers for their heroic rescue of an unconscious woman from a burning car Monday night.

Authorities identified the driver as 18-year-old Jaydon Brown and say he drifted out of his lane — striking a light pole, two trees and spinning out before coming to rest in the middle of the roadway. 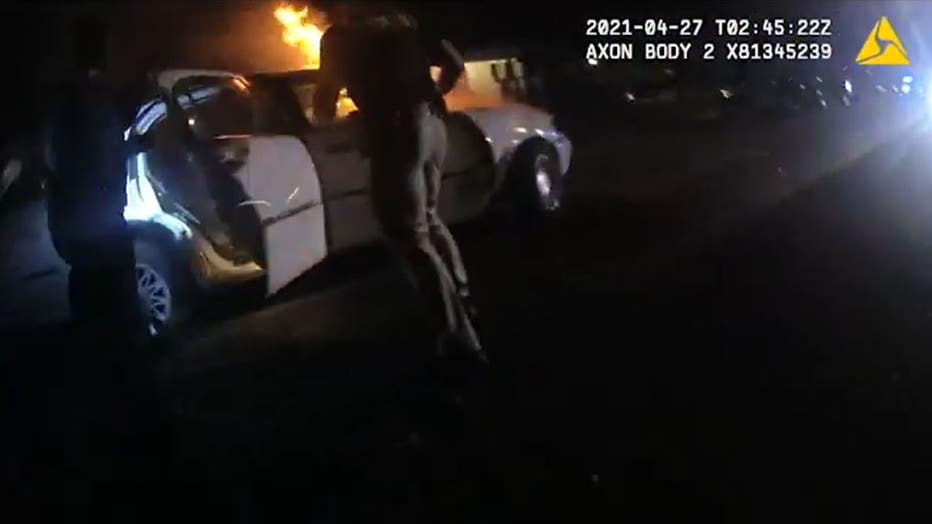 Two 18-year-olds suffered serious injuries in a crash that left one of them trapped inside a burning car.(Source: The Savanah Pulice Department via Storyful)

Police said Brown had gotten out of the car when they arrived, but the 18-year-old woman he was traveling with was trapped in the front seat and not responsive.

Whether it was locked or jammed shut, the collisions made it impossible for officers to pull her out the passenger-side door.

They scrambled to break windows, desperate for a way to free the woman. Finally, they maneuvered her into the back seat and pulled her out the back door.

Officers carried her far away from the still-burning vehicle.

Firefighters responded shortly after the rescue to find the car fully engulfed in flames. They put out the blaze as paramedics took the two survivors to a local hospital for treatment of their "serious injuries."

"I am so proud of these officers for their actions when responding to the scene last night," Minter said in a post to the department’s Facebook page where he identified the officers as:

"They literally ran toward the flames and worked quickly as a team to not only remove the passenger from the car but get her to a safe location," the post continued. "Had they not acted as they did, the passenger in the car could have suffered more serious injuries or even lost her life."

The department’s traffic investigation unit is still investigating the case.