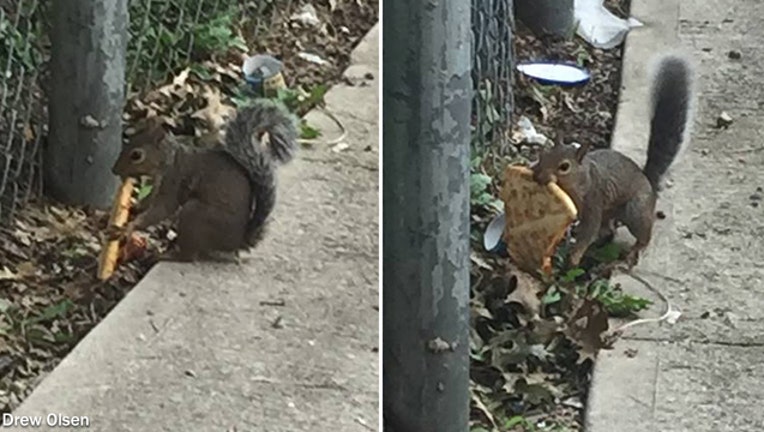 The legend of the Petworth Pizza Squirrel was born on Monday, Aug. 21, 2017 (Photos: Drew Olsen).

The legend of the Petworth Pizza Squirrel was born the day of the Great American Eclipse, but both phenomena were a sight to behold in their own right.

Drew Olsen tells FOX 5 he was exiting the Georgia Avenue Metro station at about 6 p.m. when he encountered the Pizza Squirrel.

“It was a busy street, but I was seemingly the only person that fully understood the piece of history that we were all witnessing,” Olsen told FOX 5.

Yes, the first of his name, the King of Petworth and the Squirrels, Lord of the DMV and the Protector of Pizzas was spotted chowing down on a slice of pie nearly twice his size.

Olsen confirmed to FOX 5 that it was a slice of cheese pizza, showing that DC’s newest hero not only has great taste but also likes to keep it simple.

Perhaps feeling the presence of the paparazzi moving in, Pizza Squirrel scurried away with his slice in tow to enjoy it in solitude, but thankfully not before Olsen was able to snap a few amazing photos.

Until next time Pizza Squirrel.