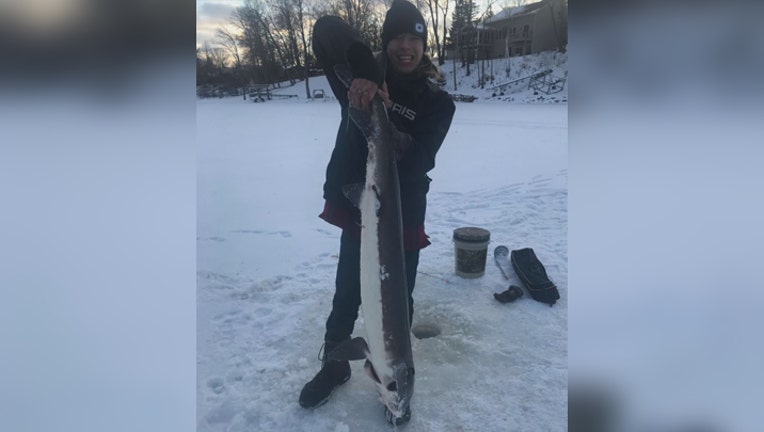 A Minnesota teen caught a massive sturgeon over the weekend in Pine County.

(FOX 9) - A family from North Branch, Minnesota had the catch of a lifetime Sunday.

It all happened at a lake in the Pine City area.

A 16-year-old boy caught a massive sturgeon on a lake in Pine County, Minnesota.

“As soon as I seen this monster roll through the hole, it was like ‘urg,’ that’s a big one,” said fisherman Dan Hirsch.

That monster was a giant sturgeon he and his two kids caught.

“She handed it to me because it was too big for her,” said 16-year-old Harley Hirsch, her brother.

That started the more than hour-long battle to get the sturgeon to the surface.

“It was quite a fight. I was unsure if the ice was going to cut the line or not. It was definitely a powerful fish," Harley said.

When they finally pulled it out from under the ice, it measured in at 72 inches.

After snapping the pic, they sent the monster back through the hole.

“I’ve never caught a fish as big as he has. So now he’s got dad beat, so now I really got some work ahead of me,” Dan said.

Like any good angler, the Hirsch family is keeping the location of their honey hole a secret.