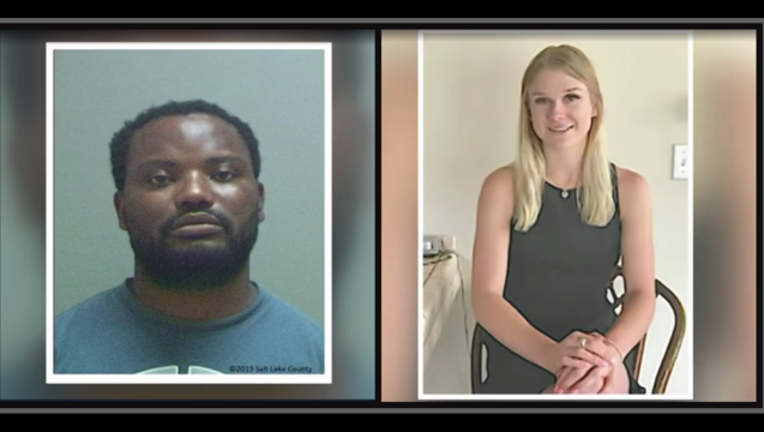 SALT LAKE CITY (AP) - A tech worker was charged Wednesday with murder and kidnapping in the death of a Utah college student whose body was found in a wooded area with her arms bound behind her.

Prosecutors said Ayoola A. Ajayi, 31, was the last person Mackenzie Lueck communicated with before she disappeared on June 17.

She died of blunt force trauma to the head, and her body was found with her arms bound with zip ties and ropes, District Attorney Sim Gill said while announcing the charges.

He declined to discuss a motive or the nature of the connection between Lueck and Ajayi. He also didn't say what kind of weapon was used.

Gill became emotional as he described the Lueck family's reaction to the charges.

"They asked me to express on their behalf the generosity of so many strangers and friends," he said. "They are genuinely appreciative and moved by the outpouring of love and compassion."

Lueck disappeared shortly after she returned from a trip to her California hometown for the funeral of her grandmother and took a Lyft from the airport to a park.

She exchanged text messages with Ajayi and met him there, apparently willingly, but her phone was turned off a minute after the last text "and never powered back on," Gill said.

Police later found the charred phone in the backyard of Ajayi's home in Salt Lake City, along with a bone, muscle tissue and part of Lueck's scalp, Gill said.

A neighbor reported a fire and a "horrible smell" coming from the yard on the day Lueck disappeared, Gill said.

Her body was later discovered in a shallow grave in Logan Canyon, 85 miles (138 kilometers) from Salt Lake City. The site is near Utah State University, where Ajayi had attended classes.

Gill said phone data puts him at the canyon a week after Lueck disappeared. Police obtained a search warrant for his home the next day.

Ajayi was arrested June 28 during the wide-ranging search for the 23-year-old University of Utah student that lasted nearly two weeks. Prosecutors did not strike a deal with Ajayi to find her, Gill said.

Ajayi was charged with one count each of aggravated murder, aggravated kidnapping, obstruction of justice and desecration of a human body. A court appearance was set for Monday.

Ajayi is represented by the public defender's office, which has refused to comment on the case.

The charges make Ajayi eligible for the death penalty, but Gill did not say whether prosecutors would pursue it.

Lueck has been remembered as a bubbly, nurturing person. She was a member of a sorority and a part-time senior at the university studying kinesiology and pre-nursing.

Ajayi is an information technology worker who had stints with high-profile companies and was briefly in the Army National Guard.

He has no formal criminal history but was investigated in a 2014 rape allegation and was arrested in a stolen iPad case at Utah State University in 2012. The arrest and the expiration of his student visa led to him being banned from the campus for about three years.

A native of Nigeria, Ajayi holds a green card that allows him to legally work and live in the U.S., Gill said.

AP contributed to this story.