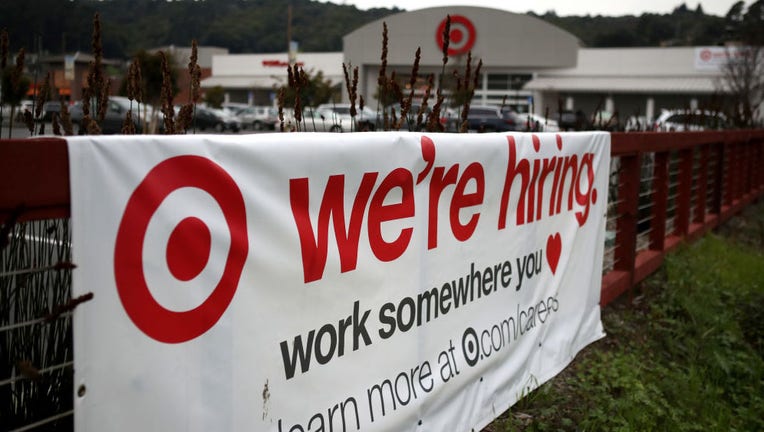 FILE-A we're-hiring sign is posted outside of a Target store in Sausalito, California in 2019. (Photo by Justin Sullivan/Getty Images)

NEW YORK - Workers at Target stores and distribution centers in places like New York, where competition for finding and hiring staff is the fiercest, could see starting wages as high as $24 an hour this year.

The Minneapolis-based discount retailer said Monday that it will adopt minimum wages that range from $15 to $24 an hour, with the highest pay going to hires in the most competitive markets. It currently pays a universal starting wage of $15 an hour.

The new starting wage range is part of a company plan to spend an additional $300 million on its labor force this year that will also include broader, faster access to health care coverage for its hourly workers

"The market has changed," said Target CEO Brian Cornell in an interview with The Associated Press. "We want to continue to have an industry-leading position."

Target set a new marker for the retail industry back in 2017 when it announced it would increase hourly wages to $15 by 2020. But U.S. labor-market dynamics have changed during the pandemic, with many employers facing severe worker shortages. And many of Target’s rivals are now paying a minimum of $15 per hour or more.

Target, which has roughly 1,900 stores and 350,000 employees in the U.S., noted that the turnover rate among its employees is now actually lower than before the pandemic. The retailer also said that it was able to exceed its goal of hiring 100,000 seasonal workers at its stores and 30,000 in its supply chain network across the country throughout the 2021 holiday season.

But Target realized it needs to have an even more localized approach to wages. It said it is still doing its analysis and declined to name the areas that will be getting the highest starting wage.

When Target first announced in 2017 it would pay $15 an hour by 2020, it was one of the first major retailers to do so. But during the pandemic, a number of rivals like Best Buy followed suit, with some surpassing Target. Costco raised its minimum hourly wages for workers from $16 to $17 last fall.

Amazon’s starting wage is $15 per hour, and the e-commerce giant’s nationwide average starting wage for jobs in transportation and fulfillment is $18 an hour.

Walmart remains a laggard: Last fall, it boosted its minimum wage to $12, from the $11 hourly base it established in 2018. Walmart also raised the hourly wages for more than 565,000 store workers by at least a dollar.

Many retailers say they’re struggling to find workers. According to a recent survey of more than 100 major retailers with annual revenues between $500 million to more than $20 billion, 96% said they’re having trouble finding store employees.

The survey conducted by global consulting firm Korn Ferry in January also found that 88% said it was difficult to find distribution-center workers.

That demand for workers has steadily pushed up wages, particularly for lower-income workers. According to the Federal Reserve Bank of Atlanta, pay among the poorest one-quarter of workers jumped 5.8% in January, compared with a year ago. That is double the gains for the highest-paid one-quarter.

But inflation has eaten away at most of those increases, with consumer prices rising 7.5% in the past year, the biggest increase in four decades. Yet that spike in inflation followed a year of muted price gains. Over the past two years, according to research by the Dallas Fed, pay increases have been strong enough to offset inflation, leaving workers, on average, with slightly higher inflation-adjusted pay.