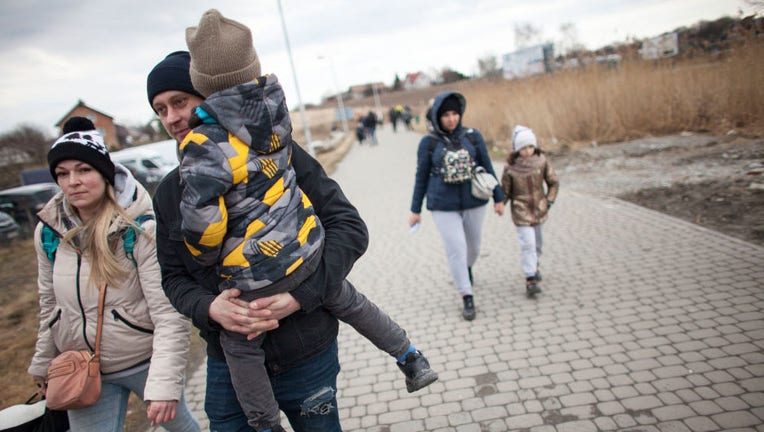 NEW YORK - The pandemic, mass shootings, natural disasters, terror attacks. There's been plenty of tragedy and anxiety for parents to sort through with their kids. Add Russia's escalating invasion of Ukraine to the list.

With events rapidly unfolding on TV and across social media, child development experts urge parents to check in with children of all ages but not to worry if those conversations are brief.

"For children under the age of 7, it might just be acknowledging that something is happening between Ukraine and Russia and ask, ‘Have you heard anything?' Take the child's lead," said Janine Domingues, a clinical psychologist at the nonprofit Child Mind Institute in New York.

RELATED: Several explosions heard in Kyiv as Russia presses on with invasion of Ukraine

For all ages, honesty is paramount, she and others said.

"Overall, just provide reassurance, that this is what we know right now. Let them know you don’t know all the answers but here are some places we can go," Domingues said.

Around the globe, from the U.S. to Western Europe, Japan to South Korea and Australia, countries immediately denounced the Kremlin as Thursday's fighting raised fear, sending stocks tumbling and oil prices surging. President Joe Biden slapped Russia with some of the broadest and toughest financial penalties the world’s largest economy can muster.

Karina Serio, 16, in Cecil County, Maryland, hopes to major in Russian and European studies when she goes to college. For now, as a high school sophomore, she helps Ukrainian kids with their English through an online volunteer organization and moderates a group chat of up to 600 Ukrainian youth at a time on the Telegram app.

"I think it’s scary," she said. "You know, right now I’m sitting here in my nice house and there’s people my age sitting in their apartments listening to sirens go off. They can’t sleep. They don’t know what to do. And I feel bad, like, what can I do?"
Janice Torres in Brooklyn is among parents already fielding questions from their kids.

"She asked why they are having a war? And if the kids are in school," Torres said of her 8-year-old daughter. "She saw me crying as I watched a video of a dad letting his kid go on a bus. She told me that she's glad America is not at war. She doesn't want to go on a bus without us."

Dr. Gene Beresin, executive director of the free online resource hub The Clay Center for Young Healthy Minds at Massachusetts General Hospital in Boston, said young children, tweens and even older teens have some basic questions in common when it comes to war, whether they verbalize them or not: Am I safe? Are you, the people taking care of me, safe? How will this affect my day-to-day life?

Though the invasion, for U.S. kids, is playing out several thousand miles from home, social media and television coverage can make it seem just next door.

That's why some experts warn against leaving TV coverage on constantly as the invasion plays out. For very young children, unplugging from screens altogether for a while could help. Preschool kids may need more TLC time with a parent or caregiver while they work through their emotions, Beresin said.

Andrea Barbalich is editor-in-chief of The Week Junior, a weekly newsmagazine for kids ages 8-14 with 100,000 subscribers in all 50 states. She and her staff have been covering Ukraine.

"We're very calm in our tone and we’re selective in the facts that we present," she said. "We avoid very frightening and upsetting information and focus on the helpers wherever we can. Right now, for example, there are thousands of people around the world and many governments working together to stop the conflict and end the fighting. There are people on the ground who are helping people who are injured. There will be humanitarian aid for people who need it."

The issue she shipped Tuesday, before the latest outbreak of fighting, focused on troops amassing at the borders, outlined the shared history between Russia and Ukraine and explained the position of the U.S. Next week's issue will take on the invasion.

"We’ve heard from a tremendous number of parents already who have thanked us for covering the story so forthrightly, and they are telling us that they appreciate our calm and factual approach because their children are frightened and they weren’t sure what to say," Barbalich said.

For kids, said Dr. Nick Hatzis of the outpatient mental health care facility Compass Health Center in Chicago, the most important step for parents is to "create a space that allows for listening." Conversation on Ukraine may be exactly what some kids want and exactly what others might not, he said.

"There's going to be a lot of back and forth," said Hatzis, medical director for child and adolescent programs. "We want to make sure that we are actively promoting our routines, our schedules, participating in the meaningful activities in our lives and in our kids' lives."