A Melbourne police officer was shot and transported to the hospital on Friday after a suspect shot at him through the door of a hotel.

MELBOURNE, Fla. - A Melbourne police officer was shot and transported to the hospital on Friday after a suspect shot at him through the door of a hotel.

Melbourne Police Chief David Gillespie said his officer responded to the Suburban Extended Stay Hotel on Dr. Martin Luther King Jr. Blvd. for a well-being call. He said his officer had a brief conversation with the suspect inside one of the rooms on Friday, before the suspect went silent, and then started to countdown.

"When he got to 3, 2, 1, he started to fire through the door, and he struck an officer in the vest," said Chief Gillespie. His officer was transported to the hospital, and is expected to be OK, he said.

Melbourne Police Chief David Gillespie said one of his officers was shot at a hotel after responding to a well-being check. He said the officer was shot in the vest, which protected him, and that he was taken to the hospital 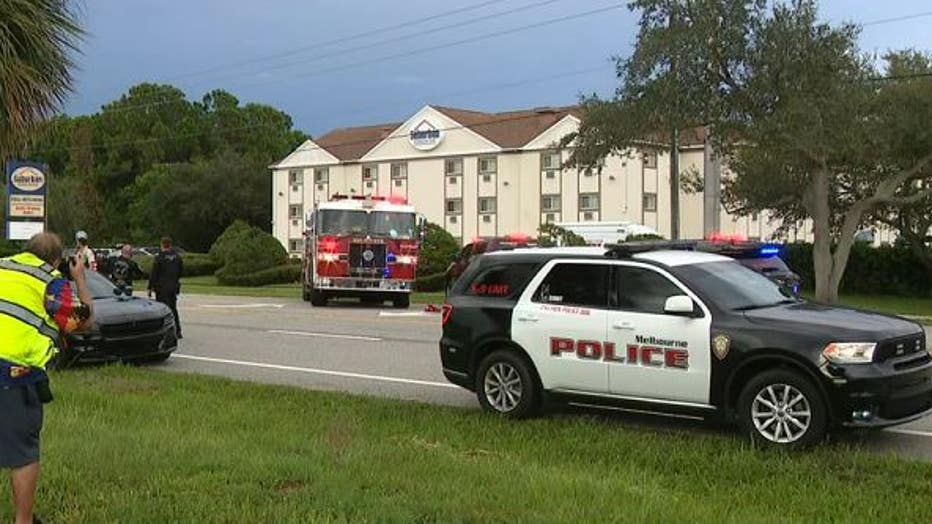 "The vest did its job," Chief Gillespie told reporters, adding that Friday also marked the officer's 26th anniversary with the agency. ""Thank god he's going to live to see another day," he said.

Chief Gillespie did not name the officer.

He said the suspect was taken into custody. The suspect's name nor potential pending charges were immediately released.

The hotel is located near the Melbourne Orlando International Airport.

"…barricaded the door and bolted it shut"

A spokesman with the Melbourne Police Department said a 911 call was received around 4:45 p.m. Hotel staff attempted to make contact with guests inside a room, and they were not responding.

"It was an open line, and we could hear some noises in the background that sounded as if a disturbance was occurring," explained Sgt. Benjamin Slover, spokesperson for Melbourne Police Department. "They had barricaded the door and bolted it shut."

A spokesman with the Melbourne Police Department said a 911 call was received just before 5 p.m. about a disturbance at the hotel.

Officers arrived just after 5 p.m. and attempted to communicate with the occupants of the room.

"We attempted to make contact with the parties inside. At that time, a shooting incident did occur," Sgt. Slover said.