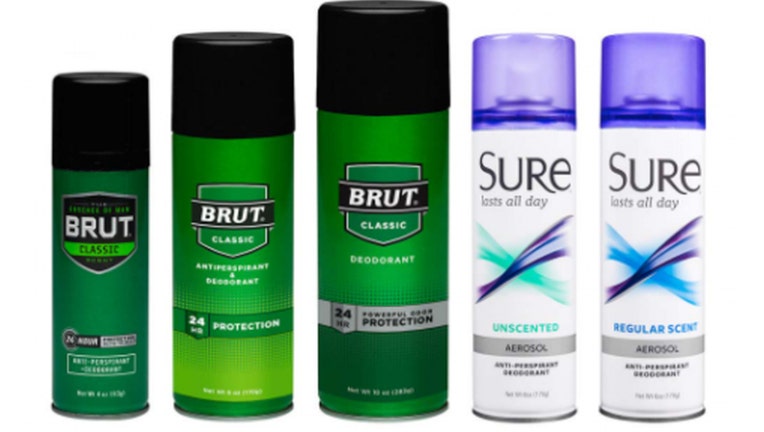 Sure and Brut-branded deodorant and antiperspirant aerosol sprays distributed across North America are being recalled after officials discovered "unexpected levels" of benzene.

TCP HOT Acquisition LLC dba HRB Brands voluntarily recalled all lot numbers of its Sure and Brut aerosol sprays with expiration dates on or before August 2023, according to the recall notice posted by the U.S. Food and Drug Administration (FDA).

The company said that the cancer-causing chemical was "not an ingredient in any of the recalled products." Rather, "unexpected levels of benzene came from the propellant that sprays the product out of the can," according to the recall.

It's the same issue that led Procter & Gamble to recall over 30 of its aerosol spray products from various brands in December.

All the recalled aerosol products, which were owned and distributed by Helen of Troy Limited prior to June 2021, were distributed around the U.S. The Brut Aerosol Deodorant, 154g, was distributed in Canada, according to the notice.

Consumers are urged to stop using the recalled products and to "dispose of them appropriately," according to the notice.

To date, no "adverse events" have been reported.

Benzene is classified as a human carcinogen and can cause cancer with repeated exposure at high enough levels. According to the Centers for Disease Control and Prevention (CDC), the chemical can also damage the immune system and prevent cells from functioning properly.

The effects of the chemical can vary depending on if a person accidentally inhales or ingests it or gets it on skin and clothing. Symptoms range from dizziness and irregular heartbeat to convulsions and, at very high levels, death.

Get more updates on this story on FOXBusiness.com.