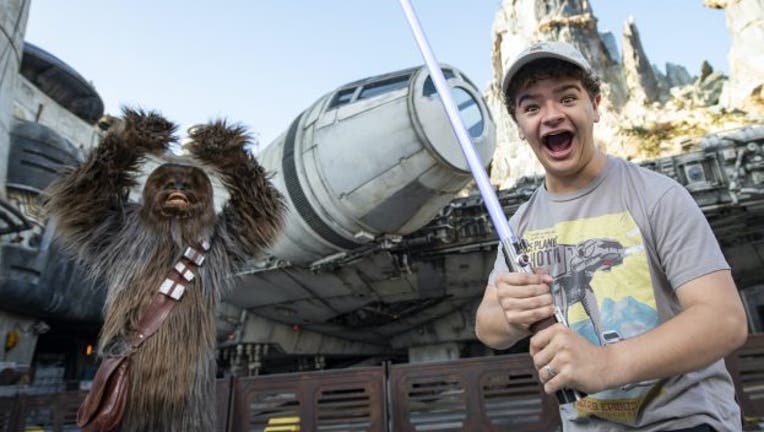 "A devout Star Wars fan, Gaten could not stop smiling when he landed on Batuu and demonstrated his surprisingly skillful Chewbacca impersonation," Walt Disney World said.

While there, he answered some questions from the theme park company in a video posted on their YouTube page.

Q: What is one attraction you can’t wait to ride while you’re here at Walt Disney World?

A: Rise of the Resistance. Easy.

Q: And do you have a favorite Walt Disney World snack?

Q: Can you tell us about a time you were pranked?

A: Yeah, my cats do it every time I try to take a shower. They’re always in the shower.

Q: What is one cause you are passionate about?

A: CCD Smiles. It’s an organization that I’m a co-founder of that helps people with cleodocranial dysplasia, a condition that I have myself.

Q: And how can our viewers support that?

A: You can go to CCDSmiles.org.

Q: Tell us two truths and one lie about yourself

Q: You took on a summer job as a food runner in your hometown last year. If you could try out a job at Disney for the day, what would it be?

Q: Do you prefer acting or singing?

A: Acting, for sure.

Q: Looking back, what’s one lesson you learned from being a star at a young age?

A: Knowing that your words have influence on people so be careful what you say.

Q: Can you give us a hint of what you’re working on next?

According to Netflix, the fourth season of Stranger Things is coming in 2022.

The streaming service released a sneak peek for the highly-anticipated release earlier in August.