A disturbance in the southwestern Gulf of Mexico is expected to become a tropical storm Friday as it moves toward the northern U.S. Gulf Coast.

ORLANDO, Fla. - The National Hurricane Center (NHC) has upgraded a system in the Gulf of Mexico to Potential Tropical Cyclone 16, giving it a 90-percent chance of development The Florida Division of Emergency Management issued a warning Thursday for the northern Gulf Coast, which was hammered by Hurricane Michael just over a year ago, to brace for “dangerous storm surge,” heavy rains and “isolated tornadoes” as a weather system threatens the region.

“The potential tropical system in the Gulf is expected to bring dangerous storm surge along Florida’s entire Gulf Coast,” the state division tweeted Thursday. “Please prepare for heavy rainfall, gusty winds, isolated tornadoes, and coastal flooding.” The tweet came as the National Hurricane Center issued a tropical storm warning for southeastern Louisiana as well as the northern Gulf Coast from the Alabama-Mississippi line to Yankeetown, Florida.

On Thursday night, the U.S. National Hurricane Center says the storm was about 445 miles (716 kilometers) southwest of the mouth of the Mississippi River. It has top sustained winds of 40 mph (65 kph) and is moving to the northeast at12 mph (19 kph).

A storm surge warning for the Florida Gulf Coast from Indian Pass to Clearwater Beach also has been issued. The system, which would be named Nestor, is expected to develop into a tropical or subtropical storm and slowly strengthen through Friday.

"The forecast track has not changed and is projected to move ashore near Destin early Saturday morning," said FOX 35 Chief Meteorologist Glenn Richards. "Central Florida will get a wave of rain and storms early Saturday morning, most likely between 5 a.m. and noon, with winds of 20 mph.  There is a slight risk for waterspout along the west coast, traveling inland far enough to prompt a tornado warning for counties in the western parts of our viewing area.  The rain then quickly moves out early afternoon on Saturday." 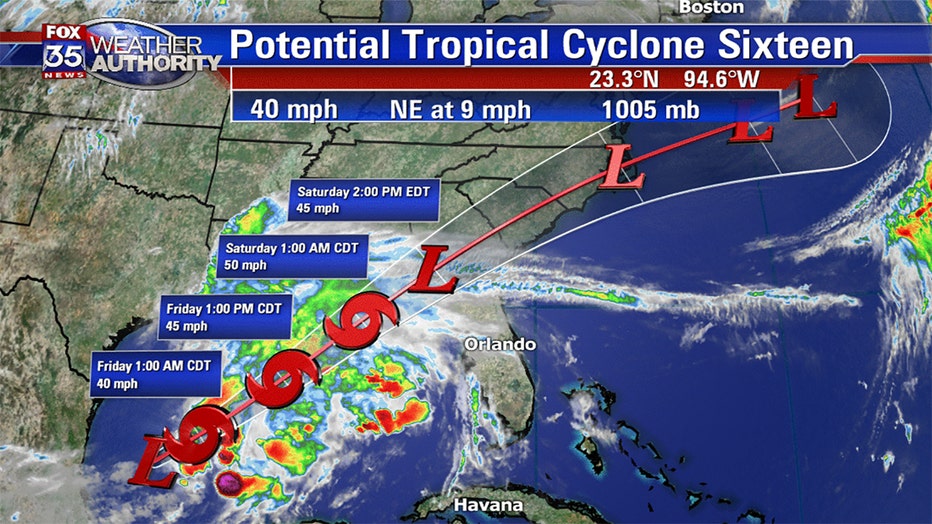 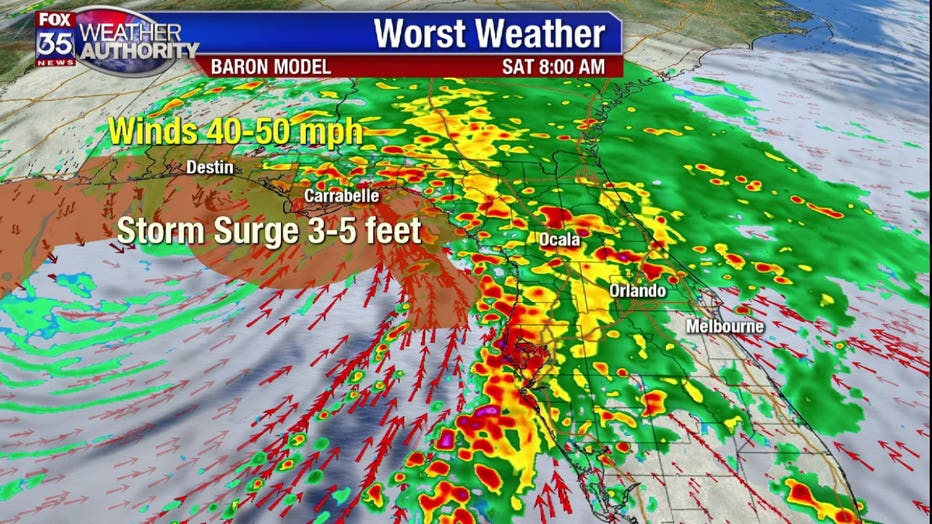 A tropical storm could bring as much as 3 inches (7.6 centimeters) of rain on the Florida Panhandle coast and as much as 1.5 inches (3.8 centimeters) inland. Arid regions of Alabama, Georgia and northern Florida were in the storm's possible track

Be sure to download the Fox 35 Weather App to be able to check the latest updates right on your cellphone.  For the latest on the tropics, go HERE.