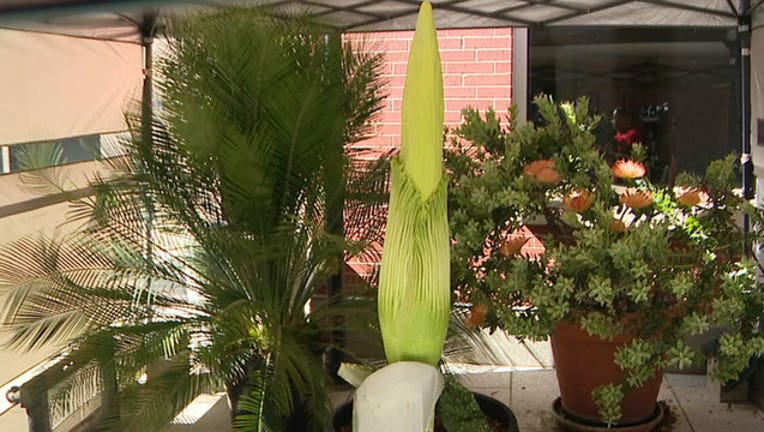 LONG BEACH, Calif. (FOX 11) - It blooms every seven to 15 years, lasts for about 24 hours and has an overwhelmingly awful stench. And now, the giant corpse lily is ready for its close up at Cal State Long Beach.

The 4-foot cluster of flowers is expected to unfurl today or Thursday, with the bloom possibly continuing until Friday, revealing not only its colorful maroon interior but its even more notorious smell, similar to that of decomposing animals and vegetables.

The species, native to the rain forests of Sumatra and also known as Titan Arum, is billed as the world's largest flower, but it is technically an "inflorescence,'' or a cluster of flowers.

It can reach more than six feet in height when it blooms, opening to a diameter of three to four feet. When in one of its ultra-rare blooms, it gives off the stench of rotting flesh, attracting insects that pollinate the flowers deep inside.

Thorson said Baker "was still alive when I acquired the specimens and I told him, and we had a good laugh about it. He was tickled and flattered.''

Giant corpse flowers blossom every seven to 15 years. Once it is done blooming it will go through a short period of dormancy before it can shoot up a large 20-foot-tall leaf that looks like a tree.

The flower was first displayed in the United States in 1937 at the New York Botanical Garden.

The typical corpse flower bloom usually lasts only about 24 hours. But it's not the sort of plant you'd want to bring home.

"The smell is so overwhelming that you can only be exposed in close quarters for a few minutes,'' Thorson said.