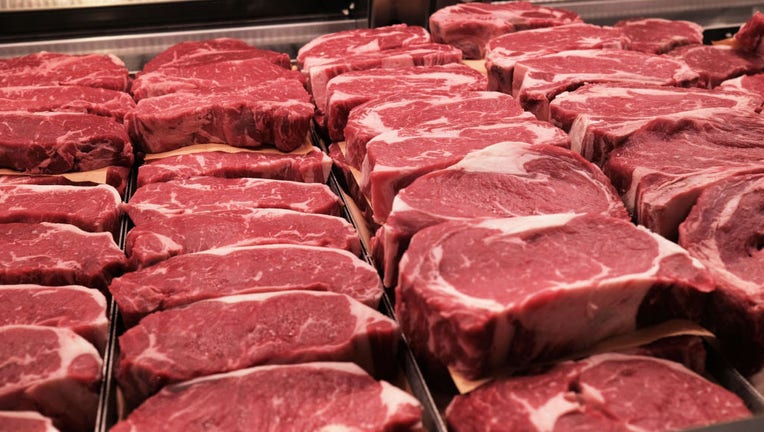 FILE - Steaks are displayed at a grocery store on May 12, 2022, in New York City. (Photo by Spencer Platt/Getty Images)

The price of steak fell slightly last month, driven by a drop in demand from consumers as Americans shift their protein preferences to lower-priced options while persistent inflation continues to squeeze their grocery budgets.

Labor Department data show the price of uncooked steak fell 1.5% on an annualized basis in July and was down 1% from June, while the price of more budget-friendly ground beef continued to soar — up 9.7% from a year ago.

According to the Wall Street Journal, the price of ribeye and beef loin fell nearly 10% compared to the year before in the four weeks leading up to Aug. 7, and brisket dropped a whopping 18%.

Although the consumer price index eased to 8.5% in July from the year before, food at home prices surged 13.1%, which is the highest increase since March 1979.

The decline in prices for higher-end beef cuts shows a continued trend in consumers increasingly making tradeoffs at the grocery store to escape sky-high inflation.

Tyson Foods CEO Donnie King said on the meat giant's earnings call earlier this month that while "consumer demand for protein remains relatively steady," folks are shifting away from premium cuts of beef and pork to less expensive options like chicken.

While steak lovers welcome the price drops of their favorite cuts at the butcher counter, it remains to be seen whether the trend will continue.

The U.S. Department of Agriculture warned last month that widespread drought has caused cattle producers to send more animals to slaughter. That influx of supply is helping to keep beef prices at bay, but industry insiders told FOX Business that the dwindling herds mean higher prices in the future.

National Cattleman's Beef Association CEO Colin Woodall said at that time, "We do expect the prices to continue upwards, but everybody has to remember that it's not cattle producers setting that price."