Dealing with long-term effects of COVID-19

State Rep. Randy Fine is still checking in with his doctor after his long recovery from COVID-19. His doctor is checking if he has any lingering lung damage from the virus.

ORLANDO, Fla. - State Representative Randy Fine, (R) Palm Bay, continues to follow up with doctors after his COVID-19 diagnosis over the summer.

On Monday, he tested his lung function after recovering from COVID-19 about 90 days ago.

Doctors call the machine he used a "body box." It's used at hospitals and by pulmonologists for lung-related ailments, including cystic fibrosis and COPD. Now, it's used to follow up with more serious COVID patients and those whose COVID symptoms don't seem to be going away.

Pedatrictic pulmonologist Dr. Akinyemi Ajayi has one in his Winter Park office.

"Once they’re past infection, you want to test them and if their lung functions are not normal, you’ll want to bring them back sequentially. It could be a month later, two months later," Dr. Ajayi said.

He says the "body box" tells doctors the size of a patient's lungs and their capacity. 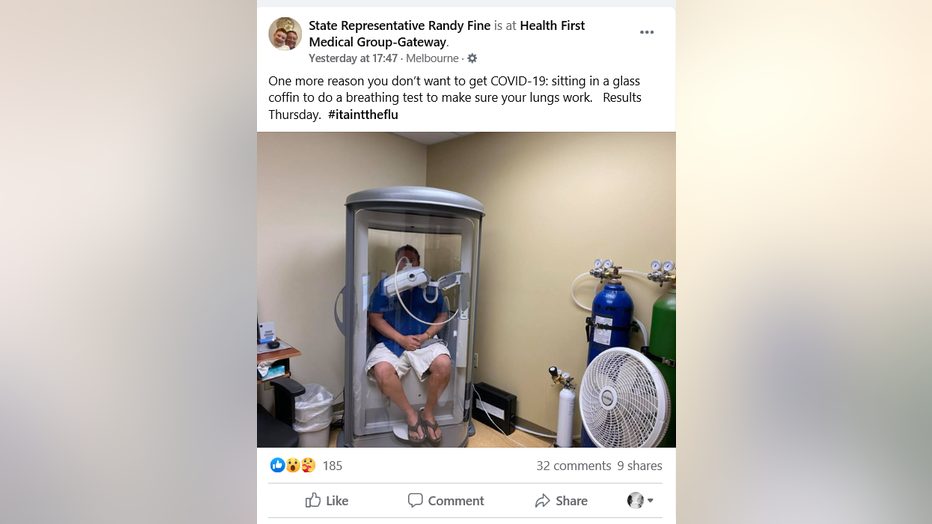 "You need to be aggressive depending on what you find because now we’re going into flu season and the last thing you want to do is someone having compromised lungs go into flu season," Dr. Ajayi said.

In September, his CAT scans showed 75% of his lung damage had already receded. Now, he's waiting to learn what happened to the rest.

"I’ve never been so sick for so long. I’ve never spent a week in the hospital. I’m trying to show an example of if it was just the flu, I wouldn’t have gone through what I actually went through," he said.

He expects his test results on Thursday.