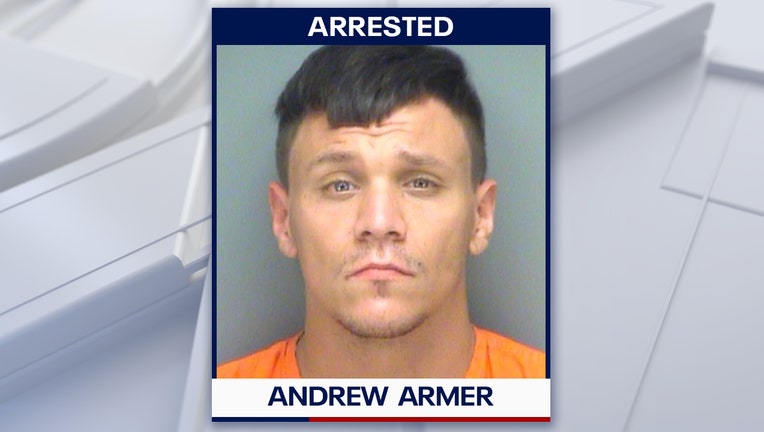 LARGO, Fla. - Largo police say two people have been arrested after one person was stabbed in the neck following a road rage incident.

Investigators said it started when two vehicles traveling along Roosevelt Boulevard escalated into a road rage situation on Tuesday, but the victim continued to his destination, a smoothie store, to purchase a drink.

When the victim exited the store, located at 2695 Roosevelt Boulevard, he found the subjects from the other car ready to confront him, police said.

A juvenile female began screaming at him, according to officers, and then spit on him.

In retaliation, the victim "defends himself by dumping the smoothie on her" before the juvenile spit on him a second time.

That's when police said 25-year-old Andrew Armer got out of his car and stabbed the victim in the neck, causing a two-inch laceration.

Investigators said the victim stumbled back into the smoothie store and collapsed at the front counter.

Largo police said Armer and the juvenile then attempted to flee the area in their vehicle, but two officers who were across Roosevelt Boulevard and heard the disturbance were able to quickly stop them.

The two officers detained Armer and the juvenile while back-up officers began immediate first aid on the victim, who was then transported to Bayfront Medical Center. He is listed in stable condition.

According to public records, Armer has been arrested several times before in Pinellas County, including multiple charges for felony battery.