ST. PETERSBURG, Fla. - Chanting "No justice, no peace," "Silence is compliance," and "arrest the police," rallies in St. Petersburg were largely peaceful.

For most of Sunday evening, about a hundred people marched through the city and held a sit-in at the police station.

"People are hurt. They are upset. This is decades of oppression I have been feeling," said protestor Jade Wright. "We are tired, we are just tired. We are not trying to fight violence with violence."

They have been marching from the police department headquarters to South St. Pete and back, using 16th Street S. and Martin Luther King Boulevard.

"We heard their message," said Police Chief Anthony Holloway. "There was no cause for that officer to do what he did to Mr. Floyd."

Saturday's protests in St. Petersburg were largely peaceful as well. 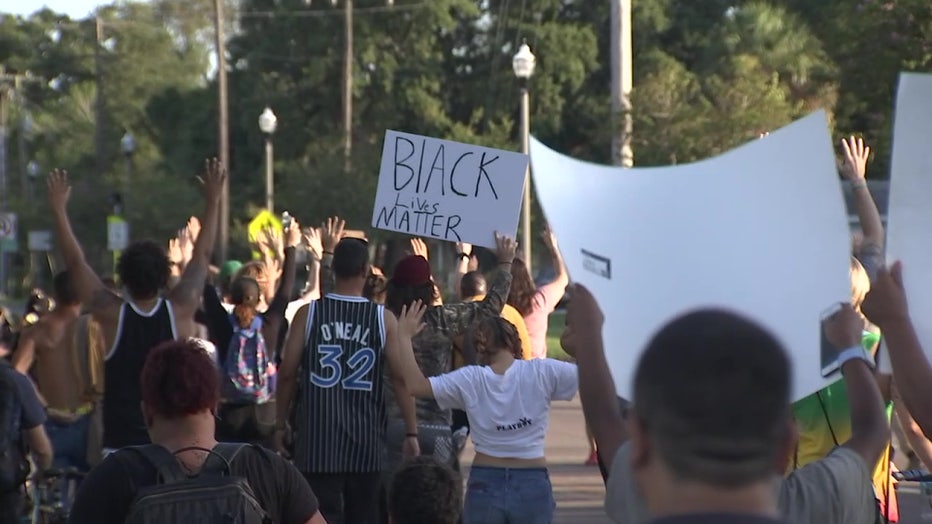 "It is moving, it is powerful. We are standing here for something we all really believe in," said protestor Ray Cummins. "I think people as a whole believe in it. Some people are scared to stand up. That is OK. It is all important we stand up for the right thing."

There was one person arrested for jumping on top of a vehicle, but otherwise, that has been the only arrest over these two days.

"We are not here to make trouble or get people angry, we are here to spread the word," said Wright. "The word is that Black Lives Matter right now. Every life matters. But right now, the black lives matter."

Mayor Rick Kriseman has not instituted a curfew.

"When you start protesting and it turns to violence. you drown out your message," said Kriseman. "The message you are trying to impart to the community gets lost in the violence."

Late Sunday night, a crowd had gathered outside police headquarters. Police say they used “smoke bells” to disperse the marchers, some of whome were throwing rocks and bottles at officers and the building.