The National Weather Service in Melbourne says the St. Johns River could be in a flood stage until around Thanksgiving.

GENEVA, Fla. - The National Weather Service in Melbourne says the St. Johns River could be in a flood stage until around Thanksgiving.

For the most serious impacts like flooded homes and roads, it's predicting water could recede for the most part by the end of October.

The National Weather Service says the water is going down in most places along the river, but it's moving very slowly.

That's because most of the rain coming down on the east coast of the state ended up in the river.

Since Florida is a relatively flat state, the water doesn't flow very fast.

The head of the hydrology team in Melbourne says while this is unprecedented, they're not surprised the water is moving so slow.

In normal times, it can take water about two weeks to go from one end of the St. Johns River to the other.  The graphic below is from Oct. 11, 2022, and shows the river is now cresting or as crested at most stages. 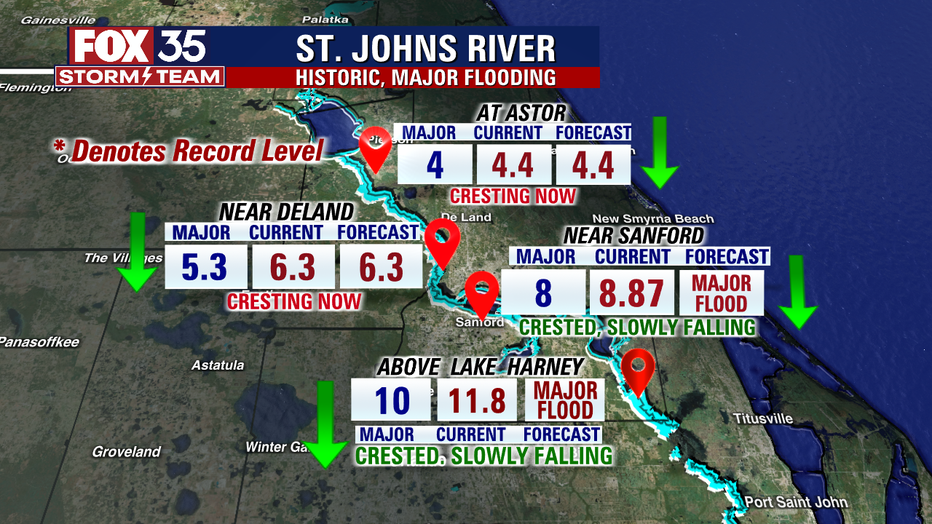 "The water at all of the points is starting to gradually decline, so we do see that very optimistically that the water is starting to recede, however it is very slow," said National Weather Service meteorologist Jessie Smith.

Unlike most rivers, the St. Johns flows south to north.

That means the water will likely recede sooner in places around Geneva than places downstream like Sanford, Deland and Astor.