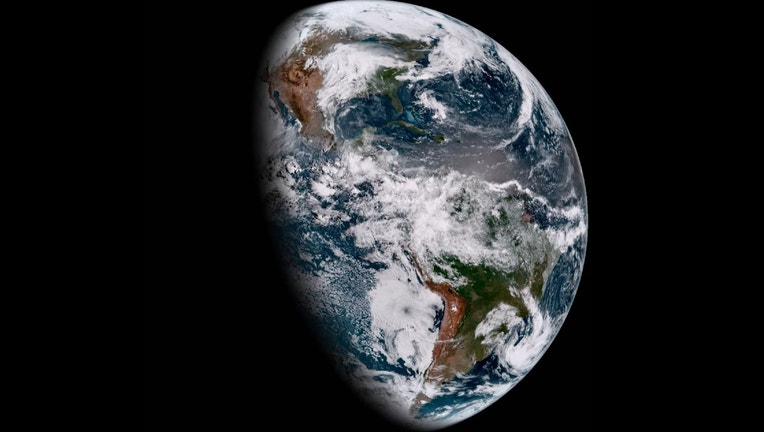 NOAA GOES-18 GeoColor image from May 5, 2022. This type of imagery combines data from multiple ABI channels to approximate what the human eye would see from space. [Courtesy: NOAA]

For meteorologists, Wednesday was like getting that new smartphone with the latest advancements in camera technology, only on a global scale.

GOES-18, NOAA's newest advanced weather satellite that launched on March 1, is sending back its first photos of Earth and the views are stunning.

The satellite is equipped with a new Advanced Baseline Imager that monitors Earth with 16 different channels, each measuring energy at different wavelengths, allowing scientists to get crucial information about the atmosphere, land and ocean.

The first images released by NOAA on Wednesday were taken around 2 p.m. Eastern.

Other instruments on board will detect and provide advance warnings for space weather hazards that could disrupt communication and navigation satellites and cause power blackouts.
Two of the instruments point directly at the sun to measure solar rays and potential space weather impacts.

And the satellite's Global Lightning Mapper detects the presence of lightning with its near-infrared optical transient detector.

"The infrared and visual samples of GLM tell you what's going on in the storms, and you use that in your analysis tools to figure out how to predict the weather," Arleen Knaub, Deputy Program Manager for GOES, says. "So, it's really advanced the whole weather science in the last four years."

Most importantly, the satellite shows no signs of instrument cooling issues that have plagued GOES-17 since its launch in 2018. That issue leaves GOES-17 unable to occasionally provide some data, though NOAA officials say the satellite is still delivering about 94% of expected data.

GOES-18 will continue to undergo its first phase of tests and calibrations at its current position over the East Coast until late summer. Then in August, it will move over near GOES-17's West Coast position and provide a data assist through much of the autumn when it's anticipated GOES-17 will have the most issues with its heating problem.

On Nov. 11, GOES-18 will resume testing until Jan. 3, 2023 when it will officially take the reins from GOES-17 and go into service as the primary weather satellite over the West Coast. GOES-17 will be pushed over to the Central U.S. and go into storage orbit as a backup.

Then in 2024, meteorologists will get another upgrade when GOES-U launches and will eventually become GOES-19, perched over the East Coast.