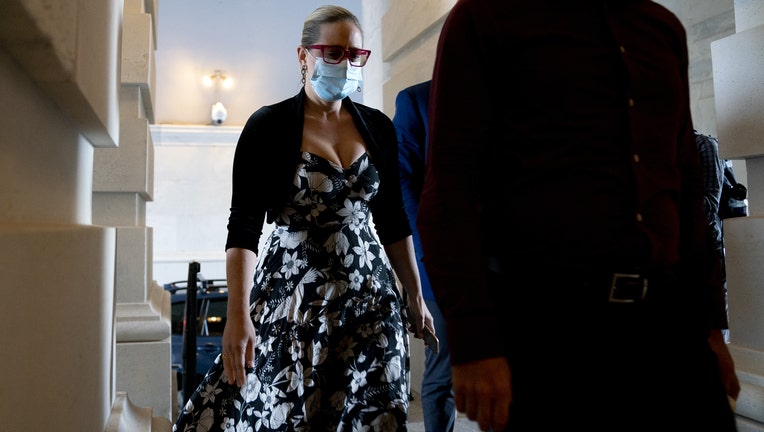 Sen. Kyrsten Sinema, D-Ariz., was confronted at an airport and on an airplane by people who demanded to know why she is refusing to support a pathway to citizenship or vote for President Biden's "Build Back Better" agenda.

In video that emerged Monday, Sinema was approached by Green New Deal Network chief of staff Kunoor Ojha and a small group of others at Reagan National Airport in Washington, D.C.

"Hi, Senator Sinema? I want to ask if you can explain to the American people what you're planning on cutting from Joe Biden's ‘Build Back Better’ plan?" Ojha asked while Sinema attempted to have a phone conversation.

Other people chimed in to ask Sinema about various issues until the questions became indiscernible.

While Sinema was on the plane, a Consideration of Deferred Action for Childhood Arrivals (DACA) recipient named Karina went up to the senator to ask her if she would commit to a pathway to citizenship for immigrants.

"Can you commit to that, senator?" Karina asked, later adding, "I don't want to disturb you, but at the same time, I just want to know if I can get a commitment from you, senator."

Sinema did not engage at length in either exchange and mostly sought to ignore the questioners.

The incidents at the airport come on the heels of footage that circulated Sunday of immigration activists following Sinema from the classroom where she teaches at Arizona State University to the bathroom. The activists demanded she support a "pathway to citizenship" while the Arizona Democrat was in the stall and later emerged to wash her hands.

Sinema and her colleague Sen. Joe Manchin, D-W.Va., have both been recently accosted by protesters for not supporting Biden's $3.5 trillion spending bill.

Manchin was approached by protesters in kayaks while on his houseboat in Washington, D.C., over the weekend.

"Senator, this is an investment," one kayaker yelled. "This is not giving out money. This is not spending. This is building the state that we both love!"

Biden addressed the confrontations against the two senators Monday, revealing that neither of them have Secret Service protection.

"I don’t think they’re appropriate tactics, but it happens to everybody," Biden said.

"The only people it doesn’t happen to are the people who have Secret Service standing around them," Biden added. "So, it’s part of the process."