WASHINGTON - U.S. employers added just 194,000 jobs in September, a second straight tepid gain and evidence that the pandemic has kept its grip on the economy, with many companies struggling to fill millions of open jobs.

Friday’s report from the Labor Department also showed that the unemployment rate sank last month from 5.2% to 4.8%. The rate fell in part because more people found jobs but also because about 180,000 fewer people looked for work in September, which meant they weren't counted as unemployed.

September's sluggish job gains fell shy of even the modest 336,000 that the economy had added in August and were the fewest since December, when employers actually cut jobs.

The economy is showing some signs of emerging from the drag of the delta variant of the coronavirus, with confirmed new COVID-19 infections declining, restaurant traffic picking up slightly and consumers willing to spend. But new infections remained high as September began. And employers are still struggling to find workers because many people who lost jobs in the pandemic have yet to start looking again. It's confounded many economists, since job openings are at a record high.

"In total, the job creation in the first eight months of my administration is nearly five million jobs, jobs up, wages up, unemployment down. That's progress. And it's a tribute to the hard work and resilience of the American people. Who are battling through this pandemic, working to keep their businesses afloat. 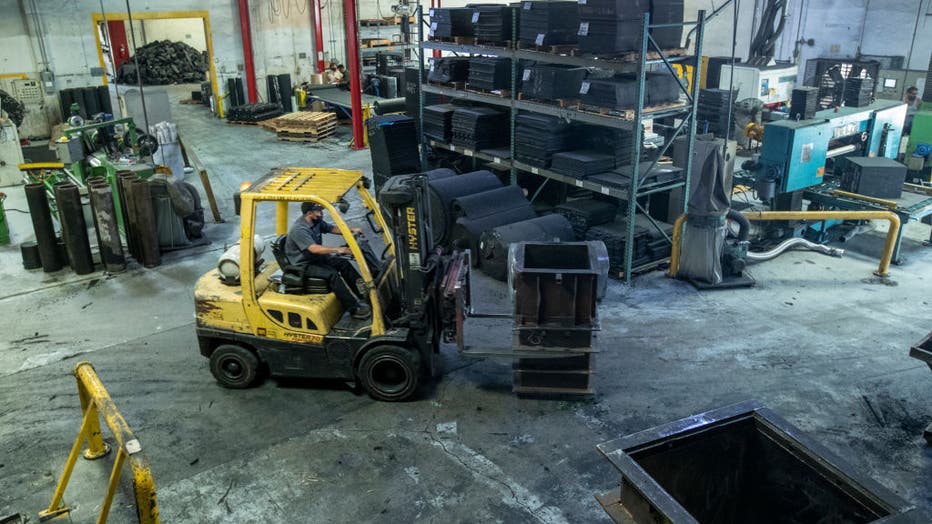 File - A shift manager operates a forklift inside the production floor at a rubber recycling company on Oct. 4, 2021, in Colton, California. (Mel Melcon / Los Angeles Times via Getty Images)

Even so, supply chain bottlenecks have also worsened, slowing factories, restraining homebuilders and emptying some store shelves. The shortages have also boosted inflation to its highest levels in three decades.

Biden said the jobs report was taken on Sept. 13 when the COVID-19 cases were higher and the pandemic held a tighter grip on American life.

Many economists expect that as COVID recedes further and Americans resume traveling, eating out and seeing movies, more people will re-enter the workforce, and hiring will strengthen.

"This report is a look in the rear-view mirror," said Daniel Zhao, senior economist at the jobs website Glassdoor, "and hopefully this means the worst is behind us, and the worst was just a slowdown in the recovery."

Economists had expected September to produce robust job growth as schools reopened, thereby freeing parents, especially working mothers, to return to jobs. Several enhanced unemployment benefit programs had expired Sept. 6, potentially providing incentives for more people to seek work. And, before delta intensified, many companies had planned to return to working in offices, which would have revitalized still-dormant downtowns.

Instead, as a result of the delta variant, many office buildings remain vacant and fears of the disease rebounded. A Census Bureau survey found that the number of people not working because they had COVID or were caring for someone with the disease doubled between July and early September. COVID outbreaks have also temporarily closed some schools, making it harder for many mothers to hold down permanent jobs.

The proportion of Americans who either have a job or are looking for one — known as labor force participation — declined in September from 61.7% to 61.6%, well below the pre-pandemic level of 63.3%, Friday's report said.

The drop in labor force participation occurred entirely among women, suggesting that many working mothers are still caring for children at home. For men, labor participation was unchanged. Some after-school programs weren't yet in place last month to provide all-day care. And child care has become scarcer and costlier in many cases.

Lael Brainard, a member of the Federal Reserve’s Board of Governors, noted in a recent speech that COVID outbreaks in late September caused 2,000 schools to close for an average of six days in 39 states.

John Lai, chief executive of Mister Car Wash, with about 350 locations, said he’s seeking to hire 500 people in the next three months to add to the company’s 6,000 workers. Mister Car Wash, based in Tucson, Arizona, has raised its average hourly-worker pay to $14.50 an hour since the pandemic began and offers health and retirement benefits. Yet it’s struggling to attract applicants.

"It is certainly the most challenging labor market that I have ever experienced in my 20 years in the business," Lai said.

Some of his female employees, he said, have had to quit to care for children. And despite the end of federal supplemental unemployment aid, Lai is seeing little increase in the number of job applicants.

President Joe Biden spoke from the White House on Aug. 6, 2021, after the release of the July jobs report showing that hiring surged and the unemployment rate dropped to 5.4%.

He suspects that one factor is lingering fear of becoming sick at work.

The enhanced unemployment aid that ended in early September included a $300-a-week federal supplement, as well as programs that for the first time covered gig workers and people who were jobless for six months or more. The expiration of those programs cutoff aid for roughly 7 million people.

Many business owners and Republican political leaders argued that the extra $300-a-week benefit was discouraging some people from seeking jobs because they could receive more money from unemployment aid. So far, though, the ending of those programs appears to have had little effect on the number of people looking for work.

Economists still think that most of the roughly 3 million people who lost jobs and stopped looking for work since the pandemic struck will resume their searches as COVID wanes. It took years after the 2008-2009 recession, they note, for the proportion of people working or seeking work to return to pre-recession levels. But the uncertainty created by a global pandemic, Zhao suggested, has made it harder to foresee when that might happen this time.

"We’re not yet at the new normal, where we can really say what to expect in terms of the pace of workers re-entering the labor force," he said.

September's meager job gain will likely still be enough for the Federal Reserve to proceed with its plans to pull back on its extraordinary assistance to the economy, said Lydia Boussour, an economist at Oxford Economics. The Fed is expected to announce in November that it will begin slowing its bond purchases, which are intended to lower long-term loan rates and encourage more borrowing and spending.

Tammy Browning, president of KellyOCG, a staffing agency, said she notices little urgency among some potential job-seekers. Some families have learned to live with less, she said, adapting to one income as mothers stay home. Household savings are, on average, still above pre-pandemic levels, thanks in part to stimulus checks.

"I think it's going to be several months before people come back in full force," Browning said.

Unemployment gaps between white and Black Americans remain large, with the white jobless rate at 4.2%, compared with 7.9% for African Americans. The Hispanic unemployment rate is 6.3%; for Asians, 4.2%.

Another factor behind the weakness in hiring last month was a sharp drop in local government education jobs. The number of such jobs fell by 144,000 last month despite the reopening of schools. That decline suggests that many local school systems didn't hire as many people as they typically do. Many have had trouble finding enough bus drivers, cafeteria workers and other support staff.

Most industries added jobs last month, though at a reduced pace. Transportation and warehousing, for example, which has been boosted by a spike in online shopping, added 47,000 jobs. Manufacturers added 26,000. Restaurants, hotels and amusement parks, though, gained just 74,000 positions, more than in August but far below the pace in the summer, when they were adding hundreds of thousands of workers a month.

Another reason workers are scarce is a surge in retirements among older, more affluent workers whose home equity and stock portfolios have surged since the pandemic struck and who have managed to build up savings. Goldman Sachs estimates that about 1.5 million people have retired who wouldn’t have before the pandemic upended the economy. Many of these people will likely stay retired, economists expect.