SARASOTA, Fla. - A video circulating social media of a raccoon being burned alive in a dumpster led to the arrests of a Sarasota father and daughter.

Sarasota County Sheriff Kurt Hoffman detailed the incident, which happened Aug. 11, saying the cell phone video, as well as surveillance video in the area, showed Roddy using a pitchfork to stab a raccoon in a dumpster. The pair then went to lunch, Hoffman said, and when they returned and saw the raccoon was still alive, they poured a flammable liquid on the animal and set it on fire.

The sheriff's office said the Snapchat video was narrated by Alicia, and showed a small raccoon in the dumpster, looking at the camera. Officials said it was not showing signs of aggression; however, Alicia was heard describing it as "mean."

Other video clips showed Roddy hosing down the dumpster, which appeared to be smoking, according to his arrest affidavit. Meanwhile, Alicia could be heard narrating, "We just toasted his a--. Who's hungry?" The camera pointed toward the dumpster, showing charred remains of the animal. 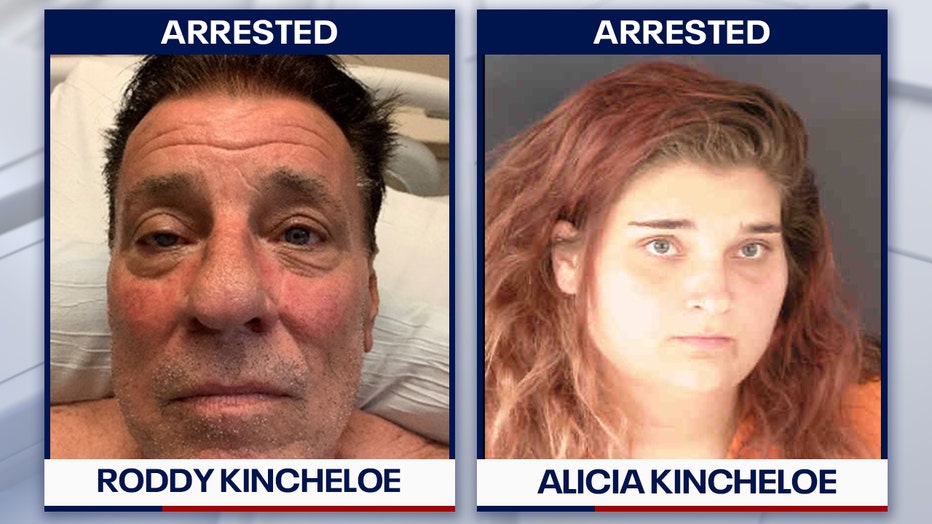 On Aug. 12, deputies met with Alicia at her home. Investigators said she admitted to posting the video and offered the following explanation:

"Alicia explained after returning from lunch, she observed the dumpster smoldering," according to the arrest affidavit. "They retrieved a gas can, which Alicia stated was filled with water, and poured it into the dumpster, however it began to ‘flare up.’ They retrieved a nearby hose which was used by Roddy Kincheloe to put out the fire. Alicia informed us at one point, her father did throw a cigarette into the dumpster prior to leaving for lunch."

Deputies and Alicia went to the dumpster behind Roddy's business, Hot Rods Automotive and Autobody, located on the 5700 block of Sarah Avenue in Sarasota. The gas can was under the front driver's seat of her food truck. Officials said she told them she keeps it with her in case her radiator needs water.

READ: Community rallies around family of couple killed in food truck crash on I-75

When deputies removed the lid, they smelled a strong odor of gasoline. When investigators spoke to Roddy, they said he provided a similar statement.

Officials then obtained surveillance footage showing the father and daughter next to the food truck and dumpster.

Sarasota County Sheriff Kurt Hoffman detailed the arrests of a father and daughter accused of stabbing a raccoon in a dumpster with a pitchfork, then burning the animal alive — all while recording the incident on a cell phone to post on social media, investigators said. The video went viral, drawing outrage from the community.

A witness was also spotted in the video and deputies spoke to her on Aug. 31. According to the witness' statement, she called Alicia after seeing the Snapchat video. When they met, Alicia told her that her father saw the raccoon in the dumpster, deputies reported. Then, he used a pitchfork to stab it and told Alicia to get the gas can.

Based on the arrest affidavit, Alicia told the witness she poured gasoline on the "still-alive raccoon and Roddy set it ablaze. They later used a hose to put out the fire. [The witness] further said the dead raccoon was removed with the intent to hide it from law enforcement."

"We don't know what the motivation was," Hoffman said. "I would speculate that it was just pure entertainment value based on the commentary that they were making when they were doing this to this animal, which makes it even more heinous and just sick."

In addition to the aggravated animal cruelty, Alicia faces a tampering with evidence charge for taking the raccoon's body out of the dumpster. The animal's remains have not been recovered by law enforcement.

If convicted, Alicia and Roddy Kincheloe each face up to five years in prison.

Both suspects have since bonded out of Sarasota County Jail.