ORLANDO, Fla. - The Salvation Army is serving 20,000 Thanksgiving meals on Thursday in Orlando.

This is the organization's annual 'Helpings from the Heart' event, made possible by the owner of 33 Golden Corral restaurants. 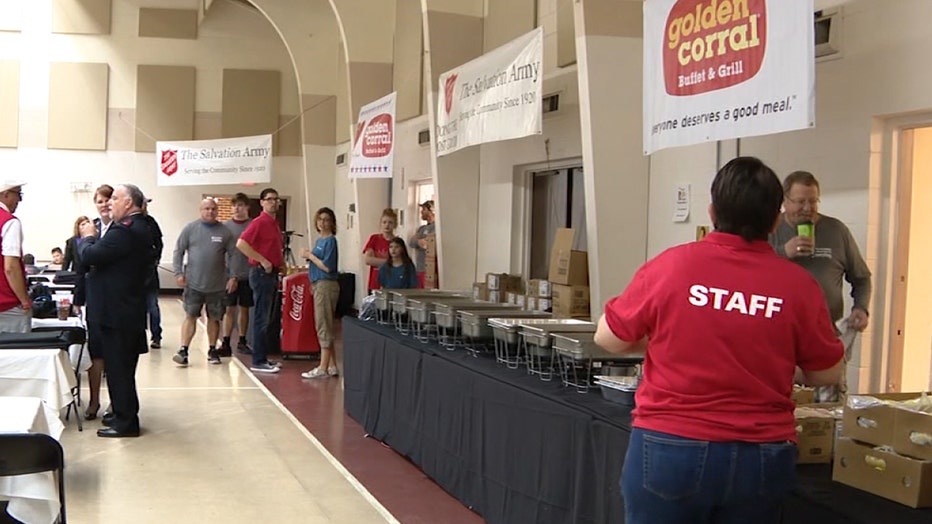 Orlando businessman Eric Holm will give out thousands of meals around Central Florida with a goal of serving 20,000 turkey dinners all day at the Salvation Army. He started the tradition as a way to give back to the community and thank the Salvation Army for feeding his family when he was a child.

It takes months of preparation and over 1,000 volunteers who give up time with their own families to be there to help others in the community.

"I'm expecting to be happy to see people in need be happy and helping them out," 10-year-old Tamia Brown said while volunteering with her mother.

"Forty-five-thousand pounds of turkey, 3,000 pounds of ham, 3,000 pounds of green beans, mashed potatoes, 15,000 dessert servings and if you line up all of the soda cans that we're going to be giving out, it will be two miles long," Capt. Ken Chapman of the Salvation Army said

The men and women lined up outside for a warm meal said they are thankful and grateful for this tradition.

"They've helped put a roof over my head and give me a bed to sleep in," Darien Tilton said. "That's how they've helped."

"I think it's wonderful they do this every year for the homeless people," Arthur Handelmann said. "I think it's great."

Organizers said it's not just about the food, but the fellowship.

"We not only feed people regular Thanksgiving dinner, but we give them some emotional and spiritual care to let them know that they're not alone - that there are people in this community that care about them," Chapman said.

The event begins at 11 a.m. at the Salvation Army off of West Colonial Drive. It goes until 4 p.m.

This is the 27th year of the event.