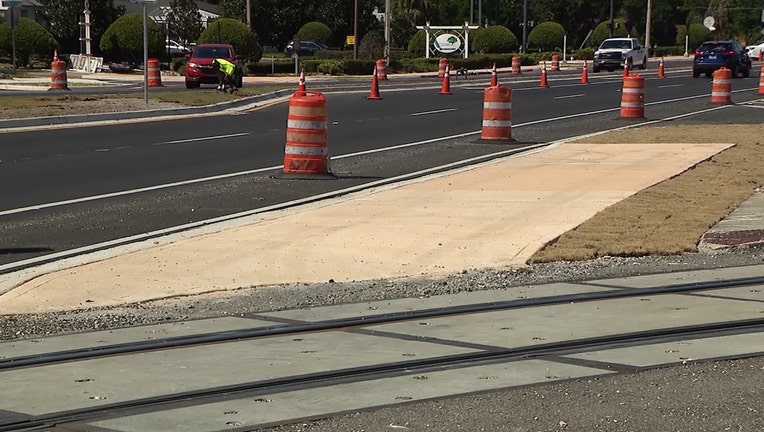 TALLAHASSEE, Fla. - Rail crossings throughout Florida, including one west of Jupiter where three members of a family were recently killed by an Amtrak train, will be upgraded for safety under a directive issued by the state transportation secretary.

Department of Transportation Secretary Kevin Thibault on Thursday ordered “unprecedented” rail safety measures for more than 4,000 crossings, with an expected cost of almost $60 million to complete by March 2022.

“One fatality on our rail crossings is one too many, and I am committed to doing everything I can as secretary to prevent additional tragedies from occurring across our state,” Thibault said.

The order directs installation of what are known as “dynamic envelopes,” essentially roadway pavement markings in areas where cars are not supposed to stop, at every existing and future rail crossing on Department of Transportation roads and state-owned land.

Thibault made the announcement at the Pompano Beach Service Plaza along Florida’s Turnpike.

Department spokeswoman Beth Frady said one of the first crossings to get the “dynamic envelope” work will be on state-owned land west of Jupiter, where a West Palm Beach woman and her two grandsons were killed less than two weeks ago when hit by an Amtrak train.

The crossing, which is on a street off the Beeline Highway leading into the 62,000-acre J.W. Corbett Wildlife Management Area, has yield and railroad crossing signs but no railway gate.

Thibault said in a statement the “directive not only exceeds industry safety standards, but it also designates Florida as a nationwide leader in rail safety.”

A release from the transportation department said 2014 and 2017 pilot programs in South and Central Florida employing “dynamic envelope” designs reduced the number of vehicles stopped on rail crossings or too close to crossings by 15 percent.

“While increasing visibility is a step in the right direction, I still believe we need gates at crossings, fencing along high-risk corridors, and increased training of local emergency service providers to assure the public is protected,” Mayfield said in an email. “These are the key safety deficiencies that were identified in the Florida Passenger Rail System Study and remain vital to protect the public as high speed rail operations continue to expand throughout the state.”

In addition to the Amtrak crash, an Associated Press report recently said the Brightline rail service, which is being rebranded Virgin Trains USA, had the worst per-mile death rate of the nation’s 821 railroads. Brightline operates in South Florida and is expanding to Orlando.

The program, which will be partly funded by Brightline, includes a crisis intervention campaign called Buzz Boxx, a mobile barber shop that will visit homeless shelters, community events and schools to provide free haircuts in exchange for signing a rail safety pledge.

“Suicide by rail is an industrywide issue and the nationwide statistics are startling,” Goddard said in a statement. “We believe a partnership with 211 is a critical next step in our efforts to help those who are vulnerable to mental health or who may be seeking assistance.”

With the 2020 legislative session starting next month, Mayfield and Rep. Tyler Sirois, R-Merritt Island, have reintroduced the “Florida High-Speed Passenger Rail Safety Act,” which in part would give the state Department of Transportation oversight of issues not preempted by federal law.

The proposal (SB 676 and HB 465) would require the state to exert its authority about rail corridors and railway operating equipment, pedestrian and road crossings, fencing for high-risk corridors and training for local emergency service providers.

Somewhat similar legislation filed in the 2018 session drew legal questions from Brightline and did not pass.