Russian forces appear to be shifting their focus from Ukraine's capital to the contested Donbas region, possibly signaling a new phase of the war.

Meanwhile, Ukrainian officials say a strike on a theater last week in the besieged city of Mariupol killed about 300 people in the deadliest single attack since the invasion started a month ago.

During a nightly video address, President Volodymyr Zelenskyy appealed again Friday to Russia to negotiate an end to the war but said Ukraine would not agree to give up any of its territory for the sake of peace.

President Joe Biden was in Poland on Friday to pay tribute to a country that has taken in more than 2 million Ukrainian refugees who were forced to flee their homes.

In a forceful speech in Warsaw denouncing Russian President Vladimir Putin and voicing strong support for Ukraine, President Joe Biden also appeared to have a message for his Polish hosts.

Speaking of a "perennial struggle for democracy," Biden mentioned the rule of law and freedom of the press among the principles that are essential in a free society.

He spoke in a speech attended by President Andrzej Duda and his political allies in the conservative ruling Law and Justice party. Since they won power in 2015, the European Union has accused them of undermining the rule of law in Poland by eroding the independence of the judicial branch of government. 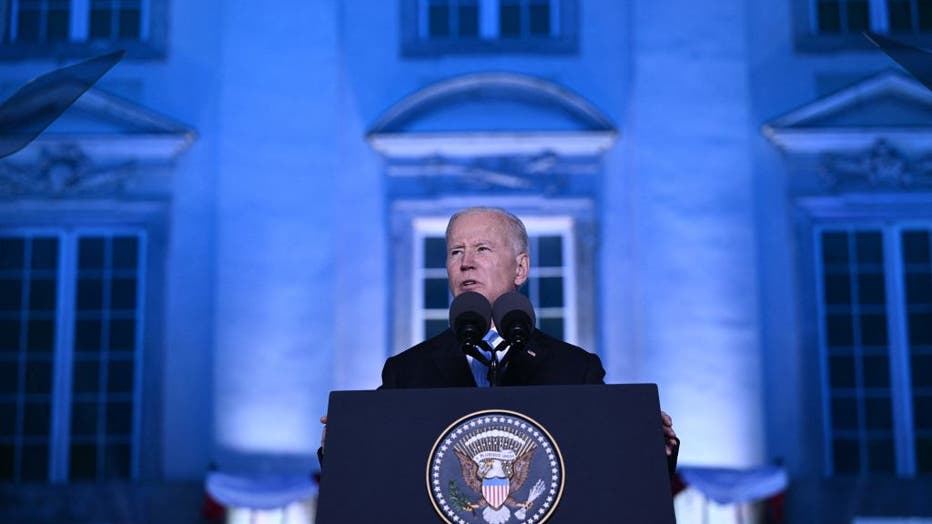 US President Joe Biden delivers a speech at the Royal Castle in Warsaw, Poland on March 26, 2022. (Photo by Brendan Smialowski/AFP via Getty Images)

Air raid sirens sounded Saturday afternoon in the western city of Lviv, and governor of the region Maxym Kozytsky reported "three powerful explosions near Lviv" without giving details of what was hit. Footage shot by The Associated Press showed thick plumes of smoke rising above the city.

Lviv, a city of over 700,000 roughly 70 kilometers (43 miles) east of Ukraine’s border with Poland, has been largely spared from major Russian attacks in recent weeks. Two weeks ago, the Russian forces fired missiles on a military training center near Lviv, which at the time was the most westward target, and killed 35 people.

Since the beginning of the invasion, Lviv has become a safe harbor for some 200,000 displaced Ukrainians.

The explosions Saturday came as U.S. President Joe Biden was wrapping up a visit to neighboring NATO ally Poland in which he told Poland's president that "your freedom is ours."

RELATED: Biden reassures Poland of US allegiance on last day in Europe

What happened in Mariupol?

Local authorities in Mariupol said Friday that last week’s Russian airstrike on a theater used as a bomb shelter killed about 300 people, citing eyewitnesses. It was not immediately clear whether emergency workers had finished excavating the site or how the eyewitnesses had arrived at the horrific death toll.

More than 1,300 people had been sheltering in the building ahead of the March 16 attack and the theater had a huge inscription reading "CHILDREN" posted outside, intended to be visible from the skies.

Tens of thousands have fled Mariupol in the past week, most of them driving out in private cars through dozens of Russian checkpoints. The city of Zaporizhzhia, the closest urban center, has become a waystation of sorts before they continue further to safety.

"Unfortunately, nothing remains of Mariupol," said Evgeniy Sokyrko, one of those who left. "In the last week there have been explosions like I’ve never heard before."

What else is happening on the battlefield?

The sheer scope of the bloodshed in Ukraine has fueled allegations that Moscow is committing war crimes by killing civilians, whether deliberately or by indiscriminate fire, with a NATO official saying Russian President Vladimir Putin’s war is "unprovoked, illogical and also barbarian."

A local official in the northern city of Chernihiv said Russian troops are deliberately targeting sites where food is being stored. It's estimated that more than 130,000 people remain in the city, which had a pre-war population of 285,000.

Chernihiv has been further cut off after a vital pedestrian bridge over the Desna River was damaged by shelling, the local governor said Friday. The tall and narrow concrete bridge had become a vital link to the outside world after the main road bridge over the Desna was destroyed earlier this week by a Russian airstrike. That severely hampered efforts to get supplies in and civilians out on a highway leading south to the capital, Kyiv. 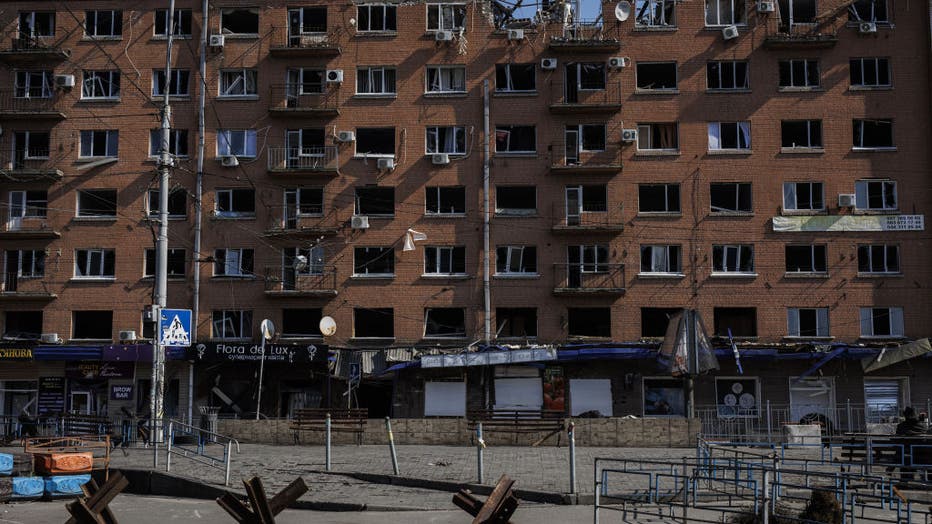 Destroyed buildings are seen after Russian attacks in residential areas of Kyiv, Ukraine on March 25, 2022. (Photo by Alejandro Martinez/Anadolu Agency via Getty Images)

What are Western leaders doing?

The United States and the European Union on Friday announced a move to further squeeze Russia economically — a partnership to reduce Europe’s reliance on Russian energy and dry up the billions of dollars the Kremlin gets from the sale of fuel.

Germany’s economy minister said his country has forged contracts with new suppliers that will allow it to significantly reduce its reliance on Russian coal, gas and oil in the coming weeks.

Russian Foreign Minister Sergey Lavrov described Western efforts to sanction Russia internationally as "total war." He said on Friday that the goal was "to destroy, break, annihilate, strangle the Russian economy, and Russia on the whole."

Meanwhile, NATO Secretary-General Jens Stoltenberg reiterated that any use of chemical or nuclear weapons "will totally change the nature of the war in Ukraine. It will be absolutely unacceptable."

What is Biden doing in Poland?

Biden saluted Poland on Friday for welcoming more than 2 million refugees who have fled Russia’s invasion. Then he met with humanitarian experts on the ground about what will be needed to mitigate the growing suffering.

His visit to Poland is his final stop in Europe this week to underscore America’s commitment to protect a key NATO member on Ukraine’s doorstep. The president also visited with some of the thousands of U.S. troops who have been sent near Poland’s border to assist with the humanitarian emergency and to bolster the U.S. military presence on the eastern flank of NATO.

More than 3.5 million Ukrainians have fled the country since the Feb. 24 invasion, including about 2.2 million to Poland, according to the United Nations. The exodus is Europe's biggest refugee crisis since World War II.

What is Russia saying?

Russian forces in Ukraine appear to have shifted their focus from a ground offensive aimed at Kyiv to instead prioritizing what Moscow calls the liberation of the contested Donbas region, suggesting a new phase of the war.

It appears too early to know whether this means President Vladimir Putin has scaled back his ambitions in Ukraine, but Russian military moves this week indicate a recognition of the surprisingly stout Ukrainian resistance. Russian-backed separatists have controlled part of the Donbas region of eastern Ukraine since 2014.

Putin’s forces are under great strain in many parts of the country, and the United States and other countries are accelerating their transfer of arms and supplies to Ukraine. In recent days, U.S. officials have said they see evidence of Ukrainian defenders going on the offensive in a limited way in some areas.

Putting a positive face on it all, the deputy chief of the Russian general staff said his forces had largely achieved the "main objectives" of the first phase of what Moscow calls a "special military operation" in Ukraine.

What is Ukraine saying?

Zelenskyy again called for peace on Friday but warned that Ukraine would not give up its land as part of negotiations.

"The territorial integrity of Ukraine should be guaranteed," he said in his nighttime video address to the nation. "That is, the conditions must be fair, for the Ukrainian people will not accept them otherwise."

Zelenskyy appeared to be responding to Col. Gen Sergei Rudskoi, deputy chief of the Russian general staff, who said Russian forces would now focus on "the main goal, the liberation of Donbas."

Russian-backed separatists have controlled part of the Donbas region of eastern Ukraine since 2014, and Russian forces have been battling to seize more of the region from Ukraine, including the besieged city of Mariupol.

Rudskoi’s statement also was a suggestion that Russia may be backing away from trying to take Kyiv and other major cities where its offensive has stalled. Zelenskyy noted that Russian forces have lost thousands of troops but still haven’t been able to take Kyiv or Kharkiv, the second-largest city.

The Associated Press has independently documented at least 34 assaults on Ukrainian medical facilities by Russian forces.

AP journalists in Ukraine have seen firsthand the deadly results of Russian strikes on civilian targets, including the final moments of children whose bodies were shredded by shrapnel and dozens of corpses heaped into mass graves.

AP journalists outside Ukraine have confirmed the details of other attacks by interviewing survivors and independently verifying war zone videos and photos posted online. The accounting is part of the War Crimes Watch Ukraine project, a broader effort by AP and PBS "Frontline."

The United Nations High Commissioner for Human Rights confirmed that at least 1,035 civilians, including 90 children, have died across Ukraine in the four weeks since the start of the war. Another 1,650 civilians have been wounded. Those numbers are certainly an undercount.