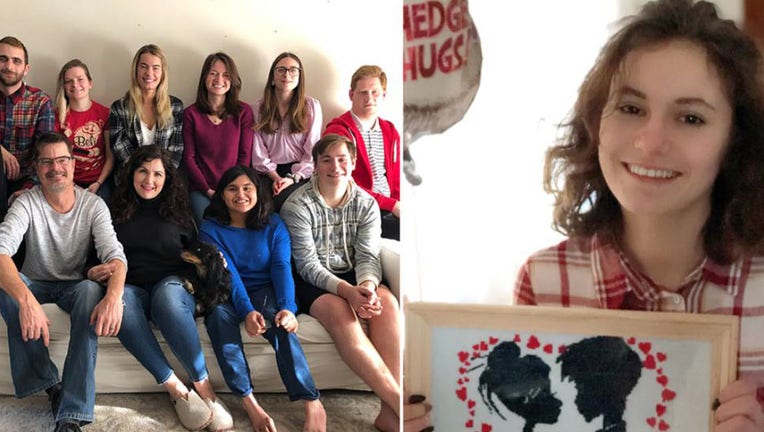 Most of the Thompson family members are shown on the left; on the right is "M," whom they're trying to rescue and adopt from Ukraine. (Colleen Thompson)

As Russia continues its attack against Ukraine, Colleen Thompson of Fort Thomas, Kentucky, told Fox News Digital on Wednesday about her family's desperate efforts to help orphans in Ukraine get out of the country safely.

One orphan in particular, "M," is a future member of their family — a teenage girl whom the family had begun the process of adopting about three years ago. They consider her their daughter and they're frantic with worry for her.

Thompson and her husband, David, have eight children, six of whom were adopted from Ukraine. Once this adoption is complete, "M" will become the Thompsons’ ninth child.

"These are children who are alone and who have been through enough trauma — more than most of us can imagine."

The Thompsons had been scheduled to travel to Donetsk earlier this week for court proceedings to finalize the girl's adoption — but the war horribly scrambled those plans. Colleen Thompson is now headed to Ukraine on Thursday, she said.

"Our daughter was in the war zone the night Russia invaded," said Thompson, who usually travels to Ukraine 5 or 6 times a year.

"M" is right now trapped in western Ukraine, where she's been moved along with other children from her original orphanage in the Donetsk region.

‘Children who are alone’

The Thompson's want legislators to lift the bureaucratic hurdles that are preventing them and other adoptive families from bringing the children home with them to the U.S. 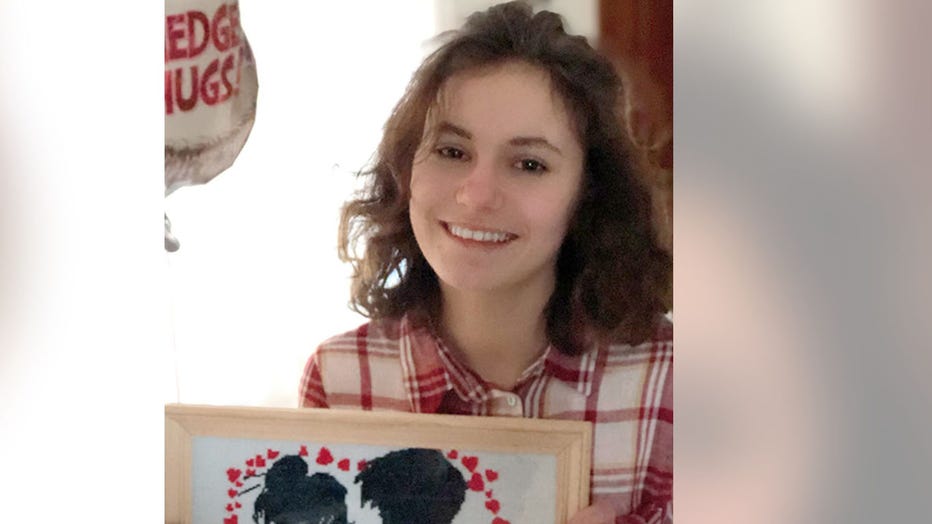 This teen girl, identified only as "M" for her protection, is trapped in western Ukraine, along with other Ukrainian orphans who are in hiding and trying to get out of the country — either to Poland or elsewhere — as Russian troops continue their ass

"These are children who are alone and who have been through enough trauma, more than most of us can imagine," Thompson said about Ukraine's orphans. "I hope that our elected officials can reach out to the State Department to expedite visas for these families."

"We need assistance from our [local] congressman and our senators to help get visas processed for [orphaned] children displaced," said Thompson. "With quick visa issuance, these children can get settled here and not have to live their lives in shelters for months" on end in Ukraine or elsewhere.

She stressed, "We need our representatives to help get visas issued quickly."

Thompson understands that her new daughter is in grave danger. 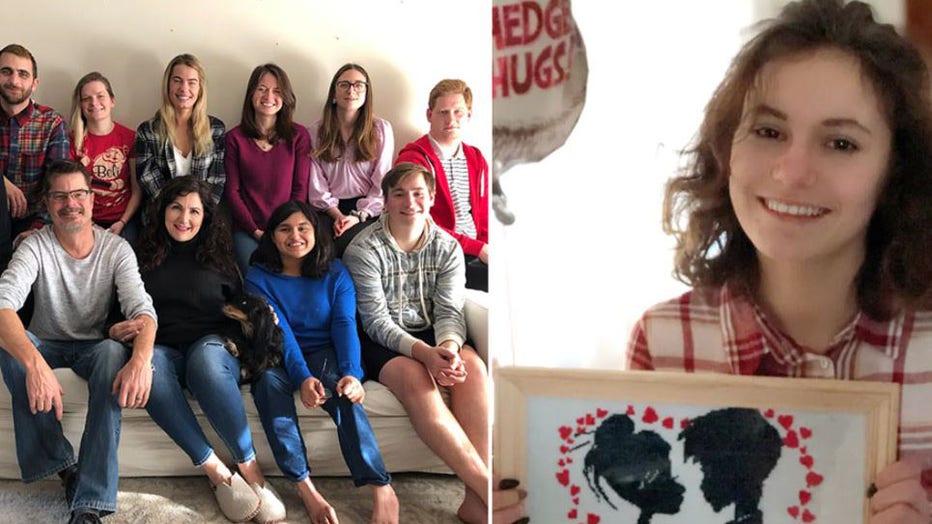 Most of the Thompson family members are shown on the left; on the right is "M," whom they're trying to rescue and adopt from Ukraine. (Colleen Thompson)

"I received a frantic message from one of [her] caretakers at the orphanage saying that there were bombs going off and they were fearful for their lives," Thompson said, referencing the past few days.

"It was beyond scary and you feel helpless. Trying to aid children from a continent away is challenging."

She went on, "We were able to get my daughter and 43 children from her orphanage in the Donetsk region moved the day after the war started," said Thompson, who's been coordinating matters from her home in Kentucky, including arranging for chaperones and transportation. 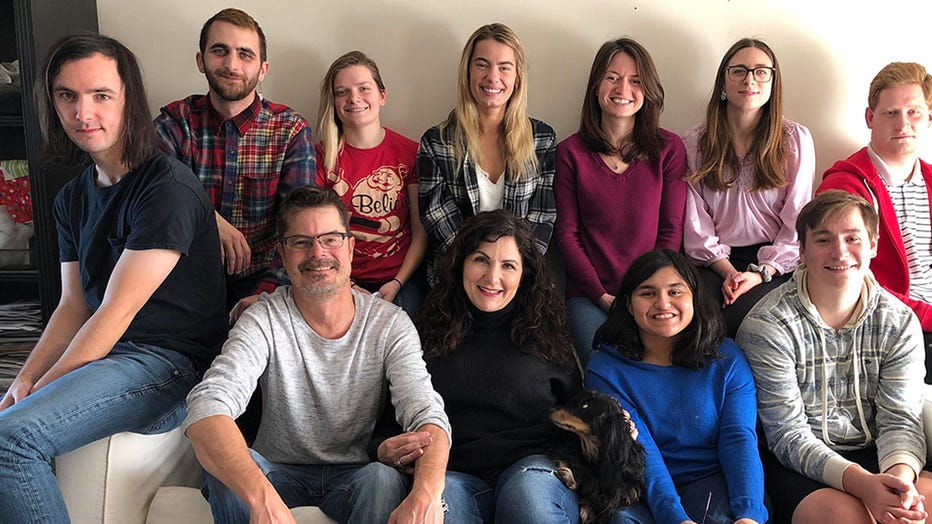 The Thompson family of Kentucky, along with a friend — but minus "M," whom they're trying to adopt from Ukraine. The parents, David (in light gray shirt) and Colleen (in black shirt), are seated in the front row, on the left. (Colleen Thompson)

The original plan was for Thompson’s daughter and other children in the orphanage to evacuate to Poland. But those plans hit a roadblock when the orphans’ chaperone dropped them off "temporarily" at a different orphanage near Lviv, Ukraine, said Thompson.

Thompson had arranged for the children to be bused to Poland, yet the director is apparently continuing to hold the orphan group in a sanatorium near Lviv. Thompson is very concerned.

"The way this is escalating, we’ve got kids sitting here and we’re risking a border closing," said Thompson, her voice cracking. 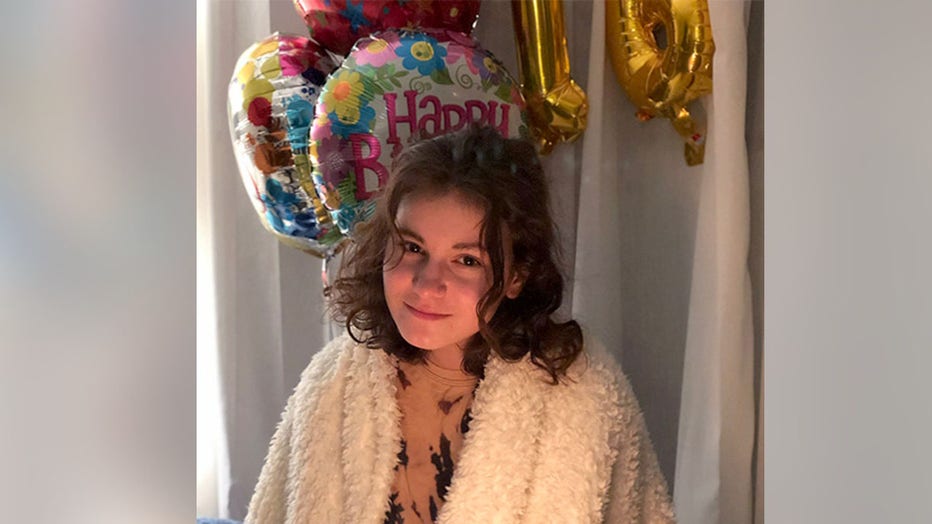 "M" is shown during her most recent birthday. The Thompson's are trying to get her out of Ukraine safely and ultimately bring her home with them to Kentucky. "We're saying, ‘Please, let us move the children,’" Colleen Thompson told Fox News Digital.

Americans are not permitted to serve as chaperones to get children across the border, she said — but she's heading to Ukraine anyway to see what she can do.

"We are literally begging Ukrainians to chaperone these children [safely] so we do this legally," said Thompson.

"It’s hard when you’re dealing with life or death. You’re trying to move [vulnerable orphans] and you can’t get the system to allow you to help," said Thompson.

"We have nonprofits lined up, churches lined up, and we’re all standing here begging. We’re saying, ‘Please, let us move the children.’"

The Thompsons first set in motion their plans to adopt "M" when she was 15 years old. "M" first arrived at the Donetsk orphanage at age 4 — but a complex, bureaucratic oversight led to an 11-year delay in her being available for adoption. 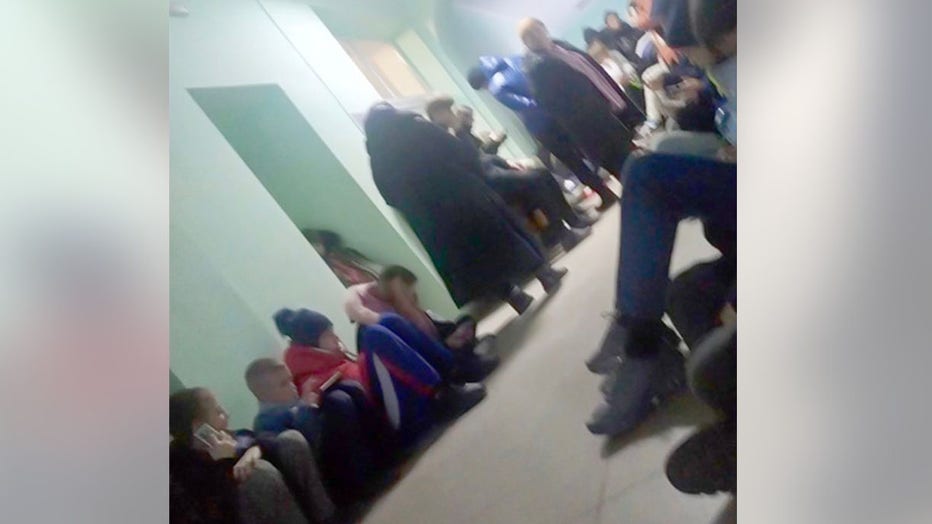 Colleen Thompson shared this image showing Ukraine orphans, including their future daughter, sitting in the hallway of a building in Lviv, as "there was concern about bombings." Said Thompson, working hard to stay steady as she spoke, "We are working

The Thompsons have visited her multiple times in Ukraine and have brought her here to the U.S. as well. It's no wonder "M" has long referred to Colleen and David Thompson as "Mom and Dad."

"My hope for ‘M’ is that we can get her released with her group to travel across the border into Poland," said Thompson. "Then, to get her settled at one of the churches we have lined up [in Poland] and apply for a visa to get her here temporarily until she’s able to return to Ukraine when it’s safe."

Thompson worries about both the girl's physical safety as well as her state of mind. Despite challenges in her life, "M" has always exuded optimism, Thompson said.

But as the Russians have moved in, Thompson said she's seen "M" go from a "spunky, bubbly, inherently happy, girl" to a teenager who now looks "sad and withdrawn." 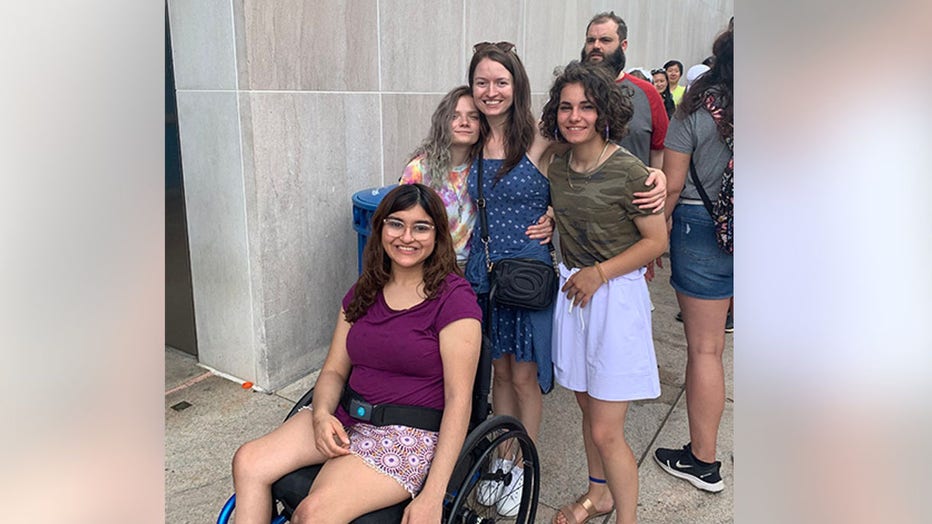 Several members of the Thompson family, including their future daughter, during a visit not long ago to Washington, D.C. "We've all previously hosted these children," said Colleen Thompson about the adoptive families she knows and is working with for

"It makes me want to fight to help her and help these other kids," said Thompson.

Thompson is hoping to enlist help from such Kentucky legislators as Sen. Mitch McConnell, R-Ky., Sen. Rand Paul, R-Ky. and Rep. Thomas Massie, R-Ky., to expedite the visa process at the State Department.

"It's beyond scary and you feel helpless. Trying to aid children from a continent away is challenging."

"I’m on my knees," Thompson said, in tears as she spoke.

Thompson spoke of the "mom army" that's been working tirelessly for the welfare of the children. It's a collaboration among adoptive moms and two Ukraine-focused nonprofit organizations, Legacy Refuge and World Child Hosting. 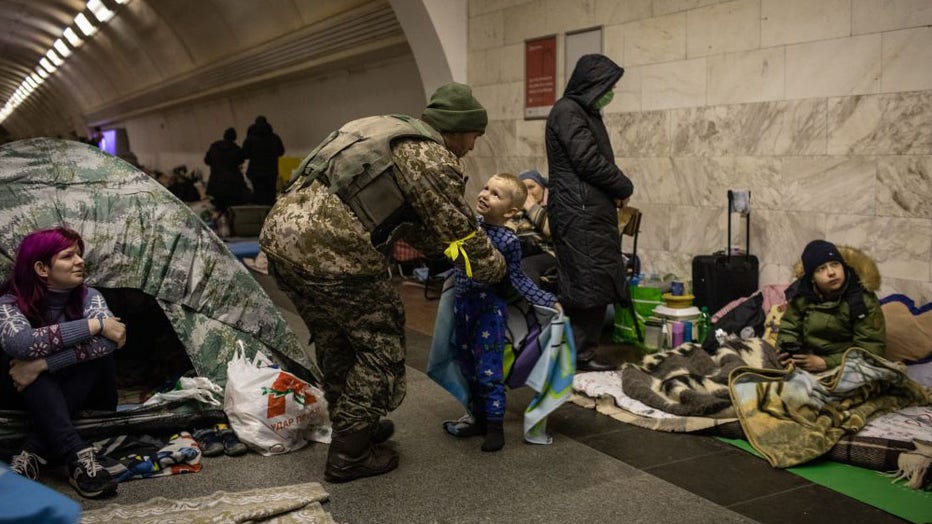 A Ukrainian soldier visits his son who is taking shelter in the lower level of a Kyiv metro station during Russian artillery strikes in Kyiv, Ukraine, on Wednesday, March 2, 2022. Russia said it would press forward with its invasion of Ukraine until

"It quickly evolved from a few phone calls to working around the clock due to the urgency and the time difference in Ukraine," she said.

The group of moms aims to get the Ukrainian orphans to safety and then to loving families who await them with open arms.

"We are working to secure buses, get permission, get food, check to see which routes are still open, which kids we can get out from which region" and more, she said.

"I don’t think any of us, including the Ukrainians, thought [Vladimir] Putin was going to do what he did," said Thompson. She did not think an invasion would happen, or at least not to the extent the world is witnessing right now.

"It would make your eyes pop out."

"M" and her peers, she suggested, might be safe at the moment — "but we don’t think that’s going to last long," she said.

Thompson says she welcomes prayer as they face great challenges ahead.

She's been posting messages on Facebook asking people to "keep praying" for Ukraine in its time of hardship.

She also said Americans interested in helping financially may donate to Ukraine-focused charities such as Legacy Refuge, a 501c3 nonprofit group.