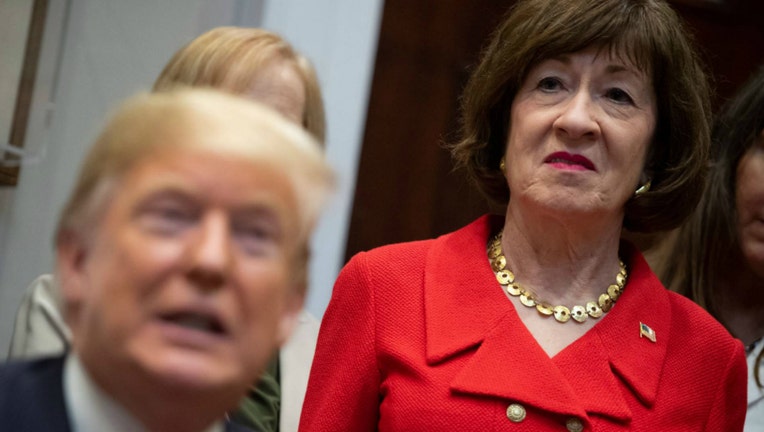 US Senator Susan Collins, Republican of Maine, stands alongside US President Donald Trump as he signs bills intended to lower prescription drug prices during a ceremony in the Roosevelt Room of the White House in Washington, DC, October 10, 2018. (Ph

Sen. Susan Collins, R-Maine, announced on Saturday that she thinks Republicans should wait until after the 2020 elections to vote on Supreme Court Justice Ruth Bader Ginsburg's replacement -- saying she believed it was out of "fairness to the American people."

"In order for the American people to have in their elected officials, we must act fairly and consistently -- no matter which political party is in power," Collins said in a tweeted statement. President Trump has the constitutional authority to make a nomination to fill the Supreme Court vacancy, and I would have no objection to the Senate Judiciary Committee's beginning the process of reviewing his nominee's credentials."

"Given the proximity of the presidential election ... I do not believe that the Senate should vote on the nominee prior to the election. In fairness to the American people, who will either be re-electing the President or selecting a new one, the decision on a lifetime appointment to the Supreme Court should be made by the President who is elected in November 3."

That position earned her a wave of backlash in the lead up to her re-election bid this November.

Given Republicans' narrow majority in the Senate, lawmakers like Collins are critical to securing GOP victories. Immediately after the Justice Ginsburg's death, observers raised questions about whether Collins, Murkowski, and Sen. Mitt Romney, R-Utah, who approved an article of impeachment this year, would allow a vote.

After Ginsburg's death, Murkowski and Romney refrained from addressing a future vote in their statements commemorating the late justice. Murkowski, however, told Alaska Public Media just days prior that she "would not vote to confirm a Supreme Court nominee. We are 50 some days away from an election."