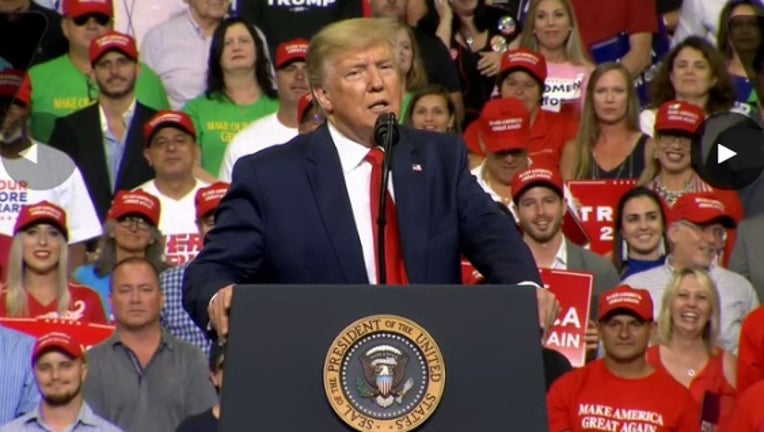 ORLANDO, Fla. - President Donald Trump is coming back to Orlando.

Just hours after Florida Republicans unexpectedly postponed the state party’s biggest fundraiser of the year, Gov. Ron DeSantis announced Tuesday that President Donald Trump will be the keynote speaker at the event, which is now scheduled for Dec. 7.

DeSantis was previously scheduled to be the main speaker at the Republican Party of Florida's 2019 Statesman’s Dinner in Orlando, originally slated for Nov. 9. But the state GOP on Monday afternoon announced via Twitter that its gala would be postponed until an unspecified date later this year.

The event’s delay surprised prominent Florida Republicans, including Senate President Bill Galvano and Congressman Matt Gaetz, a Panhandle Republican who is a close ally of both the president and the governor.

“That was an announcement of first impression for me as well,” Galvano, R-Bradenton, told reporters and editors gathered at the Associated Press annual legislative planning session in the Capitol. “But it seems like it will be a robust fundraising dinner.”

The dinner is a key event for state Republicans, meant to rally support and raise money from the GOP base. Ahead of the 2020 election, where Trump is hoping to secure his re-election in one of the nation’s largest battleground states, the dinner is especially important.

"America's best governor, our favorite president, and a room full of RPOF warriors. It's going to be one hell of a night,” tweeted Republican Party of Florida Chairman Joe Gruters, who is also a state senator from Sarasota, following the governor’s announcement Tuesday morning.

Gruters, however, did not respond to a request for comment about other details of the event, such as its location or other speakers.

Before the dinner was postponed Monday afternoon, Peter O’Rourke, the state party’s executive director, told the News Service of Florida that details about the annual gala were still being finalized.

After DeSantis named Trump as the keynote speaker and identified the rescheduled date for the annual fundraiser, state GOP leaders remained mum about other details involving the Dec. 7 gala.

Florida Democrats eager to unseat the Republican president next year also hit a few snags of their own, when failing to book 2020 presidential candidates for the Florida Democratic Party’s annual fundraiser earlier this month.

A spokeswoman for the Trump campaign ribbed the state Democrats for having to rely on “cardboard cutouts” of the presidential contenders “because not a single candidate showed up.”

“Given the latest failures from Florida Republicans --- I’d rather be us than them right now,” Peñalosa said, prior to DeSantis’ announcement that the president would be the guest speaker.

The president’s last event in Florida was in The Villages earlier this month to sign a Medicare executive order.

In June, Trump kicked off his 2020 re-election campaign in Orlando during a rally at the Amway Center.

The News Service of Florida contributed to this report