SYDNEY - A firefighter in Australia has defended her decision to keep fighting the ongoing wildfires even though she is pregnant, saying she "won't just stay behind" as her country burns.

The most intense fires on Wednesday were concentrated in northeastern New South Wales and Queensland, where hundreds have been forced to evacuate their homes. 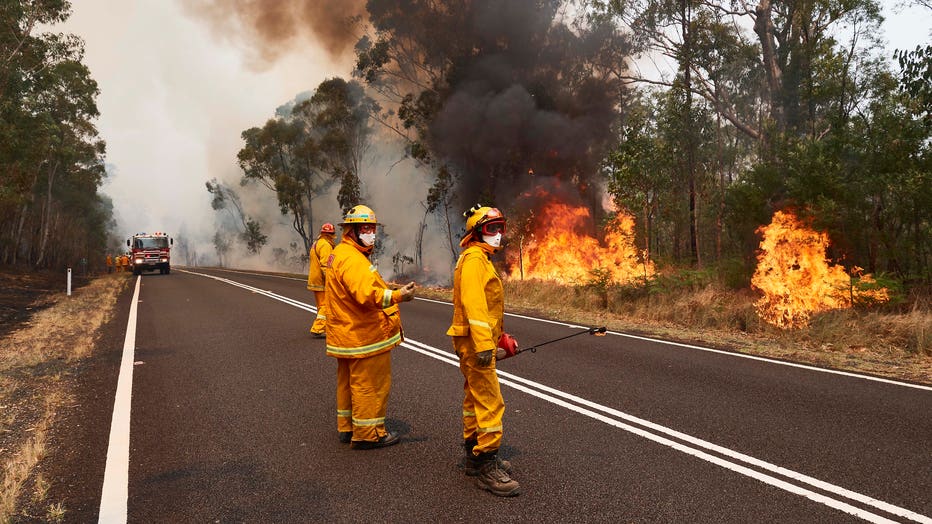 CFA Members work on controlled back burns along Putty Road on Nov. 14, 2019 in Sydney, Australia. (Photo by Brett Hemmings/Getty Images)

New South Wales has lost more than 200 homes since Friday, while 14 homes have been destroyed in southeast Queensland. Tony Wellington, mayor of the Queensland town of Noosa North Shore, said Wednesday that residents there were being evacuated for the second time in a week.

As nearly 70 wildfires continue to burn across New South Wales, fire officials said that about 1,000 firefighters remain on the ground. One of those firefighters is 23-year-old Kat Robinson-Williams, who posted several images of herself and colleagues on Instagram as they battled the flames.

"For all the females on the ground in NSW right now," she wrote. "We stand together we stand proud !!"

Robinson-Williams, who is 13 weeks pregnant, defended being out fighting the fires, saying she "won't just stay behind" and that she doesn't care if people "don't like it."

"I love my country I love my mates and if that means I’m needed on the ground, then I’ll always make the way," she wrote. "As long as I am physically able to help, I’ll always work my best...As I’m a firefighter, Just like all the rest!!"

Robinson-Williams told the BBC she has been a volunteer with the NSW Rural Fire Service for 11 years and is the third generation in a family of firefighters.

"I'm not the first pregnant firefighter and I'm not going to be the last one," she told the BBC. "I'm still in a position where I'm able to help so I will."

In another Instagram post, the 23-year-old shared a photo of her ultrasound and described her baby as a "little firefighter in the making."

A severe fire danger warning remains in place for much southern Queensland for the next week, with soaring temperatures and thunderstorms expected. Rural Fire Service Commissioner Shane Fitzsimmons warned that rain is not forecast for months.

"We've got another tough day today and there is an extended forecast that we are not out the woods by any means," said Michael Wassing of the Queensland Fire and Emergency Services Commission.

The Insurance Council of Australia, an industry body, said insurers have received 450 fire damage claims in the disaster areas so far. In New South Wales, more than 50 homes were damaged or destroyed and 13 firefighters were injured overnight by catastrophic wildfires across that subsided on Wednesday.

At one point on Tuesday, 16 fires raged out of control at the emergency level simultaneously across New South Wales, a near-record number.