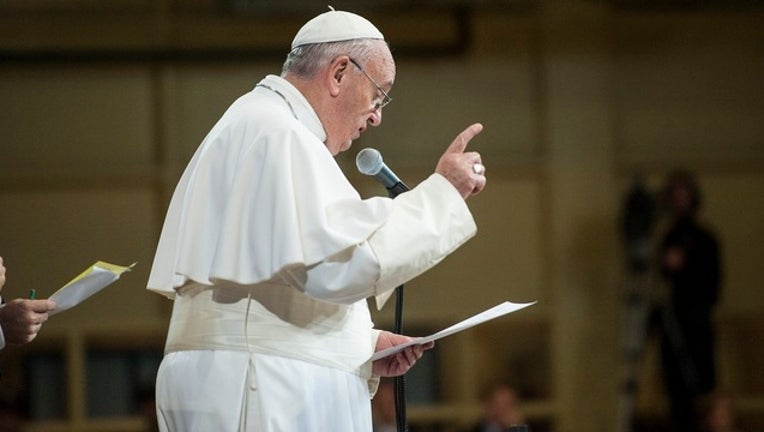 Photo by Kait Privitera via City of Philadelphia

ABOARD THE PAPAL PLANE (AP) - Pope Francis has sought to lower expectations from his big sex abuse prevention summit next month.

Francis told reporters returning from Panama on Sunday that he wants the Feb. 21-24 meeting to essentially be a catechism class for bishops about sex abuse. He said he wanted to sensitize church leaders around the globe to the pain of victims, instruct them how to investigate cases and develop general protocols for the entire hierarchy to use.

"Let me say that I've sensed somewhat inflated expectations," he said. "We have to deflate the expectations to these three points, because the problem of abuse will continue. It's a human problem."

Francis' lowering of expectations will likely not go over well in the United States, where rank-and-file Catholics are withholding donations and demanding accountability from their bishops after the hierarchy's repeated failures to protect children were exposed again last year.

The crisis began in early 2018 when the Argentine pope strongly defended a Chilean bishop accused of cover-up. It intensified when a prominent U.S. ex-cardinal, Theodore McCarrick, was accused of sexually abusing minors and adults, and then reached crisis point when a grand jury in Pennsylvania detailed allegations of 70 years of abuse and cover-up in six dioceses in the state.

Francis himself was implicated in the McCarrick scandal when a former Vatican ambassador accused him of rehabilitating McCarrick from sanctions despite knowing of his penchant to sleep with seminarians. Francis, who removed McCarrick as a cardinal when the allegations of abusing a minor were lodged, is expected to soon decide whether to defrock him.

Francis in September summoned the presidents of bishops conferences for the summit after realizing that church leaders in some parts of the world still didn't "get it." In fact, more than 30 years after the scandal first erupted in Ireland and Australia and 20 years after it hit the U.S., bishops in many parts of Europe, Latin America, Africa and Asia either deny the problem exists in their regions or downplay it.

Expectations for the February summit grew in part because the head of the U.S. bishops' conference, Cardinal Daniel DiNardo, claimed that the Vatican had cited the need to wait for the meeting's outcome before adopting U.S. protocols to address the scandal last year. In fact, the Vatican blocked the U.S. vote on the protocols because the U.S. conference had withheld the legally problematic proposals from Vatican review until the last minute.

The U.S. bishops had wanted to create a reporting mechanism to hold themselves accountable that would have involved a lay-led commission receiving accusations when bishops themselves were accused of misconduct. An alternate proposal called for the accusations to be fielded by the metropolitan bishops who have regional responsibilities over other bishops.

Francis suggested that idea could figure into the general protocols under consderation, saying the protocols would discuss "what bishops, the metropolitans and the president of the conference must do."

Francis entertained a wide range of questions during his 45-minute in-flight press conference. In addition to abuse he:

- ruled out a blanket relaxation of priestly celibacy but expressed a willingness to consider letting older, married men serve as priests in remote communities where priests are in short supply. The proposal for so-called "viri probati" is expected to figure into debate at a big meeting of bishops later this year from the Amazon, where the faithful can go weeks or months without a Mass.

- called abortion a "terrible drama" that can only really be understood in the confessional. He said when he is hearing the confession of a woman who has had an abortion, he urges her to speak to her child, "sing him the lullabies you didn't have a chance to sing to him." ''Here you have a path of reconciliation of the mother with the child, and with God. God will forgive."

- said schools should by all means provide sex education to children, but without imposing an ideology in the process. Francis has frequently lashed out at what he calls "ideological colonization" of students with school books and programs promoting gender theory, abortion and other teachings about sex that go against Catholic teaching.

- said he has refrained from picking sides in Venezuela's political debate because he is pastor to all Venezuelans. Francis said if he followed other countries in endorsing one leader over another - "I would place myself in a role that I don't know. It would be pastorally imprudent and I would do harm." Francis on Sunday called for a "just and peaceful" solution to the crisis that respects human rights and avoids suffering. But he didn't say if the Holy See would recognize opposition leader Juan Guaido in his claim for the presidency over Socialist President Nicolas Maduro.