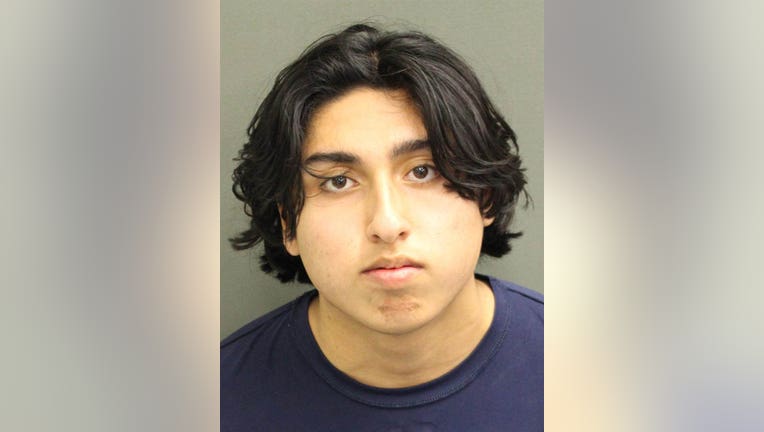 DAVENPORT, Fla. - A high school student from Orlando was the host of a house party in July 2020 that led to four teens being injured, and another charged with DUI, according to Polk County investigators. They said he used the identity of a Texas man to rent the Davenport home.

On Monday, 18-year-old Mateo Pinzon Penagos was booked into Orange County Jail for charges stemming from last summer’s incident in Polk County. He faces several charges including burglary, criminal use of personal identification, and allowing minors to consume alcohol.

The house party occurred on July 22, 2020 at a home in the Cypress Point gated community in Davenport. That night, deputies received several noise complaints and responded.

When they arrived, they said teens at the party began to disperse. One of those teens, a 16-year-old from Winter Garden, began driving away in a Kia Stinger. Deputies said his vehicle struck four other 16-year-olds who were standing in a driveway.

One of the teens was dragged under the car for about 450 feet. She has a "permanent serious injury," but deputies didn’t specify her injury.

The teen driver fled but deputies located him about eight miles away. The teen faces several charges including, DUI, DUI with property damage, DUI with injury, and leaving the scene of a crash with property and bodily damage.

After the arrest of the teen driver, detectives said they focused on tracking down the person who hosted the illegal open house party. They learned the home was rented through VRBO, an online website for short-term rentals. According to Sheriff Grady Judd, there was between $2,500-$3,000 worth of damage to the home.

"These companies that rent these houses need to check out these folks. This is a kid," Judd said Tuesday.

Detectives obtained the rental records which showed that a man from Corpus Christi in Texas was listed as the renter, they said. However, they learned the Texas man’s personal information was stolen and the rental was secured using his identity.

Through the investigation, detectives said they had witnesses who saw Penagos with the stolen personal information and knew he was responsible for arranging the house party. His residence is in Orlando.

Three of the four injured teens from the night of the house party had non-life-threatening injuries. Detectives said the fourth teen will survive but will likely have additional surgeries in the future.

"We’re fortunate that the female who was dragged…is alive today but she’s in significantly serious condition," Judd said. "It was a horrible night for these children. This guy is locked up for his efforts."

"Ladies and genetlemen," the sheriff added, "there’s got to be accountability when you do what he did."