While keeping your child warm is a major concern, puffy jackets should be removed before strapping them into their car seat.

JOHNSTOWN, Pa. - As the winter ushers in frigid temperatures, police are reminding parents of the hazards associated with bulky coats and children riding in car seats.

While keeping your child warm is a major concern, puffy jackets should be removed before strapping them into their car seat, according to the National Highway Traffic Safety Administration. 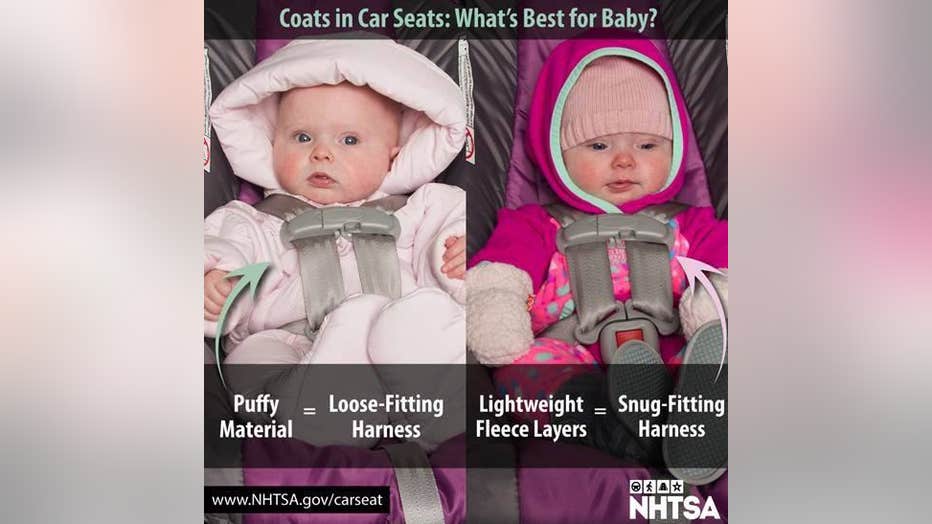 Demonstration of how a child's harness should fit over their jacket.  (NHTSA)

Thick coats can interfere with how tightly the harness fits and ultimately make the car seat ineffective during a crash.

"Instead, use a lightweight jacket with a blanket over top, or even use the heavier jacket as a blanket," Logan Township police in Pennsylvania suggested in a post on Facebook.

A quick way to check if your child’s coat is too bulky is to pinch the harness between your thumb and forefinger. If there is any slack room between the straps and your child’s chest, it needs to be tightened, according to safety tips from the American Academy of Pediatrics.

Forty-three percent of children who died from car crashes between 2010 and 2014 were improperly restrained, according to a recent study published in the Journal of Pediatrics.