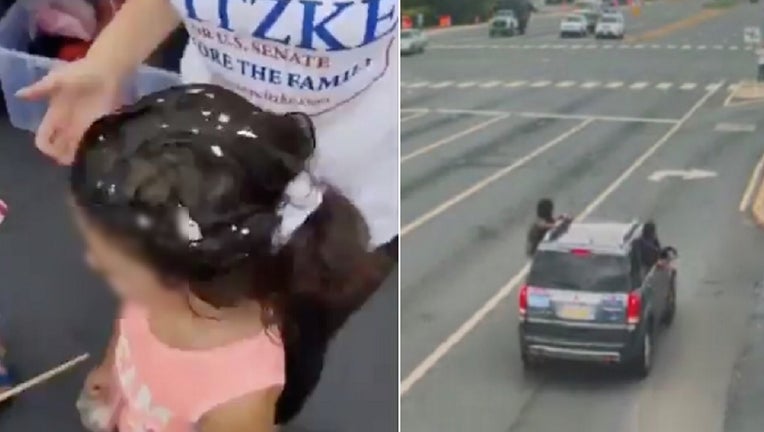 WILMINGTON, Del. - Delaware State Police have released a photo of a car-full of suspects they say threw eggs at a Republican political rally over the weekend, striking six people, including children.

The photo shows at least two men hanging out of an SUV around 1 p.m. Sunday, near Crossroads Restaurant on the 4500 block of Kirkwood Highway

State police responded to the scene to find that three children, ages 5, 7, and 10 were among six people struck by raw eggs while attending the political rally. Three adults, aged 41, 44, and 70, were also struck during the incident.

At the time of the incident, police say the victims were standing on a concrete wall adjacent to the highway when they were struck by eggs thrown from the occupants of the vehicle in the photo.

Republican candidate for U.S. Senate Lauren Witzke tweeted video of the aftermath showing a child with eggs in her hair.

The suspects have been described as males approximately 20-25 years old and riding in a gold or white SUV.

Anyone with information regarding the identity of the three suspects are asked to please contact Trooper Batschelet of Troop 6 by calling (302) 633-5000.