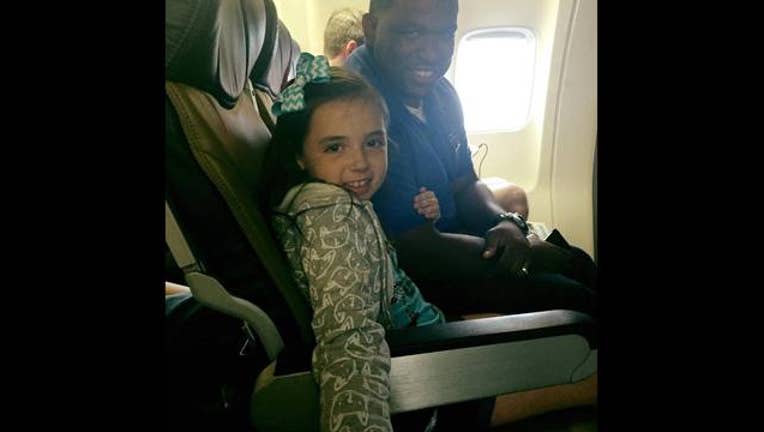 FOX NEWS - A Southwest flight attendant is being commended for comforting a young passenger with a serious flying phobia. On Saturday, Erika Swart posted a picture to Southwest’s public Facebook page where she introduced the world to Garrick, a flight attendant serving her flight from Orlando to Newark. In the photo, Swart explains that Garrick is holding the arm of her 9-year-old daughter Gabby, “a type 1 diabetic with severe flying anxiety.”

“Upon take off he noticed she was struggling. Throughout the flight he tried making her laugh and bringing her special drinks,” Swart explains, detailing how the kind flight attendant helped make the journey easier. “As we were getting closer weather was rough and there was a bit of turbulence. Gabby began having a complete panic attack on descent. He came up to the front and asked if she would like for him to sit next to her in the empty seat.”

The mother explained that she was traveling without her husband but had two other children in tow so Garrick’s help was greatly appreciated throughout the flight. After some rough turbulence, Gabby started crying and held the flight attendant’s arm harder, her mom said. Garrick reportedly told the young traveler that she could "hang on as long as she needed."

“Just after this due to the extreme stress she was under her blood sugars began dangerously crashing,” she wrote. “He got up from his seat to get her an orange juice and came right back to sit with her. She asked again if she could continue to hold his arm while the plane was landing. He of course agreed.”

Upon arrival, Garrick announced on the PA system that his new friend Gabby had overcome her fear of flying.

“The whole plane clapped for her,” Swart told the airline. “It was a wonderful experience on Southwest. We are forever grateful to have met such a beautiful, selfless soul.”