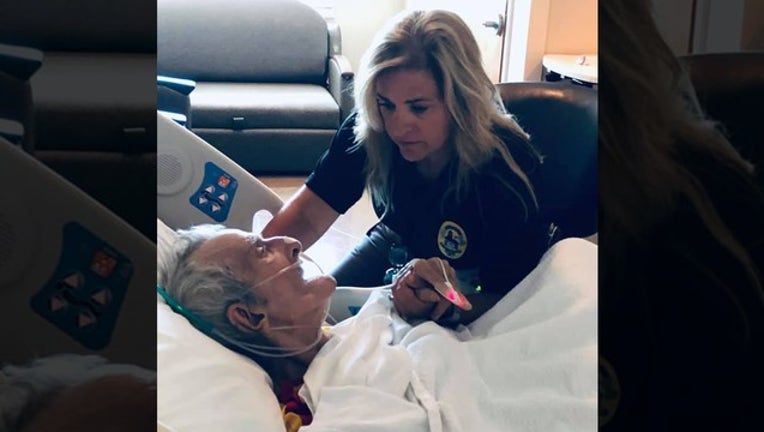 LAWRENCEVILLE, Ga. (FOX 35 ORLANDO) - A Georgia man who had spent years being homeless has died just days after a heart breaking photo of an officer holding his hand in hospice went viral.

Shannon Volkodav shared the touching photo on Facebook and the story of the friendship between the man, known only as Bob, and Lawrenceville Officer Dena Walker Pauly.

Volkodav says in the post that Pauly met Bob in 2017 when she responded to a call at a local pawn shop. The staff didn't know how to help Bob, who was left non-verbal after suffering a stroke. He had no known family and no friends. Pauly took Bob to where he was living and saw the deplorable conditions he was living in daily.

"She immediately addressed Bob's deplorable living conditions and taught him basic skills such as throwing garbage in the trash can rather than the floor. She's ensured he has food to eat and routinely cleans his small apartment," Volkodav wrote.

Opening her heart to basically a stranger, Pauly eventually received Power of Attorney over Bob's medical care. Eventually she made the difficult decision to put him in hospice.

Despite his inability to fully communicate, the two shared a special bond.

Before Bob passed away, Volkodav snapped a photo of Pauly at his bedside, holding his hand and comforting him.

"She held his hand and told him many times that she loved him. It's quite possible she's the first person to ever utter those words to this poor man."

"This photo depicts the true nature of law enforcement officers. We are drawn to this profession because we care. We care so deeply that it hurts sometimes. We see the worst, but sometimes we also get to see the best. And we have opportunities to truly make a difference for people. Like Bob."